MLC in Melbourne, missionaries on their last transfer, harvesting raspberries, finding Kim and Victoria, fasted on Sunday for miracles - indeed 7 investigators came and a sister who did not want to be contacted
showed up in church!


Jan 2, Monday - It's that time of the month again. Flew to Melbourne, flight was not cancelled this time but the Elders were delayed. We waited at the airport from 6-9 pm. While waiting, I suggested that we pretend to charge our phone and it would be a conversation starter for the person also charging his/her phone. As we were looking for an outlet, we spotted an older lady sitting alone in one of the cafes. I sat next to her while Sister Burden bumped into all the chairs which sparked a conversation with her. I thought she did it on purpose haha and I still praised her for her excellent GQ skills for starting a conversation. hahaha. Talked to this lady and she said that she met missionaries before when she lived in Hobart. She said that she was more spiritual when she was not in any religion. Her husband was atheist and later said 'Hi' to us. They were also waiting for their grandkids on the same delayed flight.  An Iranian family joined us as well when we noticed this cute little boy walking around. We gave the Iranian couple a Search Card and they were pretty excited about it. The older couple accepted a card and said that they might check the website. 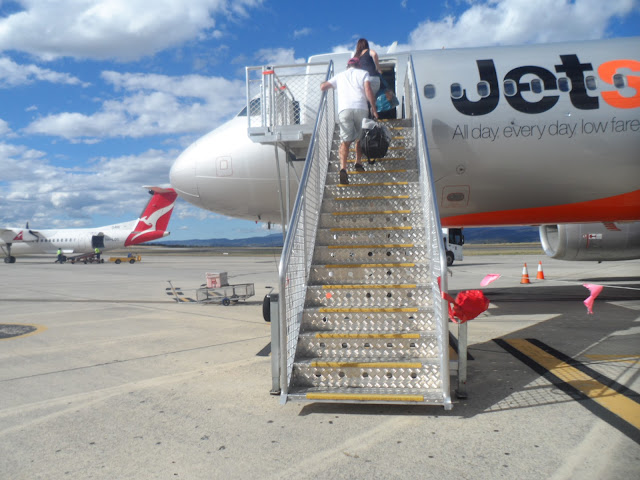 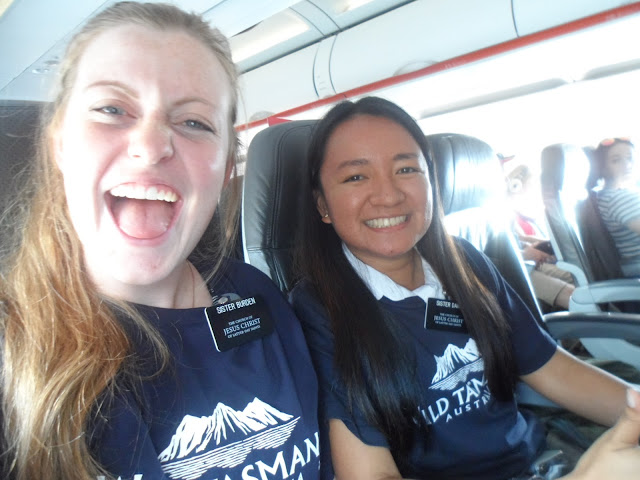 We tried these on the plane then took the shirts off afterwards.

We decided to meet the Assistants in the car park already and waited for the Tasmania ZLs in the car.  We got to the mission home at 10:45 pm. 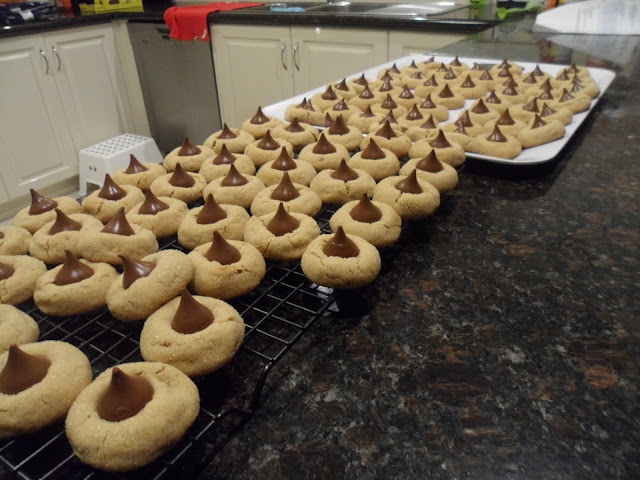 10:45 pm: our dinner.  Sister Vidmar baked these cookies for the MLC tomorrow and we ate some before we went to bed.

Jan 3, Tuesday - MLC in the mission home. One of the changes discussed during MLC was the process of exchanges which should be done in the leaders area.  the leaders area should be a model area for missionaries to follow...a pressure on our part as leaders.. 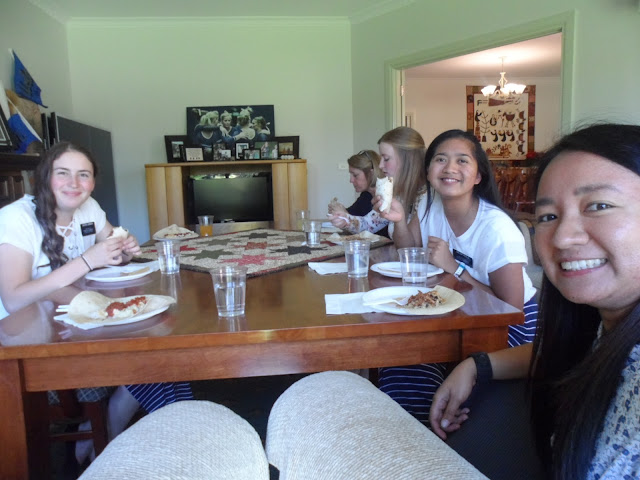 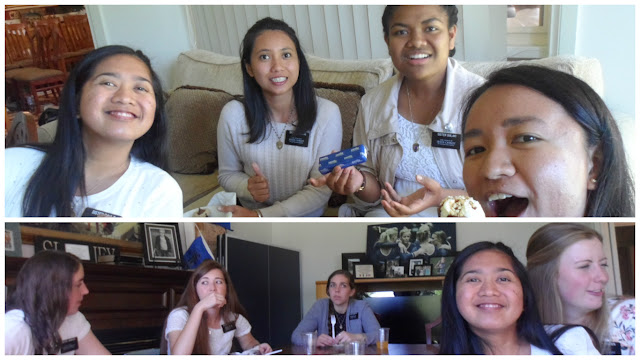 Top photo: With new STL on the east side, Sister Manosig; Bottom half: new STL in the City, Sister Roberts in gray cardigan.  This would be the last transfer and last MLC of Sisters Paulo, Johnson and Roberts.  We will surely miss them. 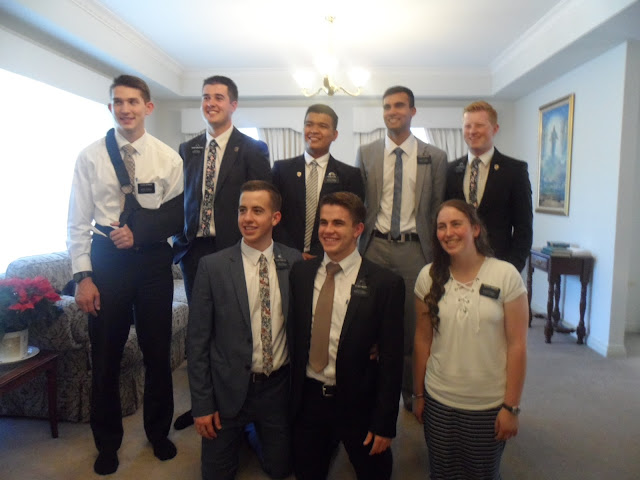 These elders are the same intake with Sisters Johnson and Paulo.  Now they have 6 months to go and might go home same time with us. 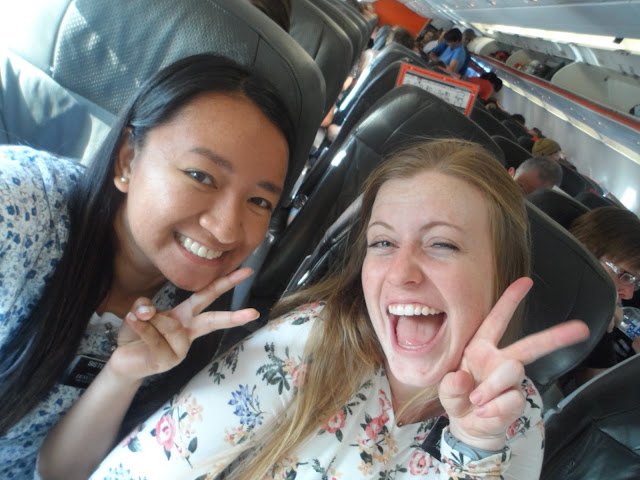 Flying back to Launceston

Jan 4, Wed - We did service by helping pick raspberries with the Deloraine Elders' investigator, Kathryn. While helping Kathryn, we asked and talked about 'where we come from, why we are here, and where we are going.' She didn't believe in life after death but believed that our soul after death would join with the energy of the trees and the surroundings.  It was weird but she was nice to us.

We were excited to pick the raspberries until we were told to watch for snakes.  If we see snakes, just leave them alone.  if we mind our own business, the snakes would leave us alone. 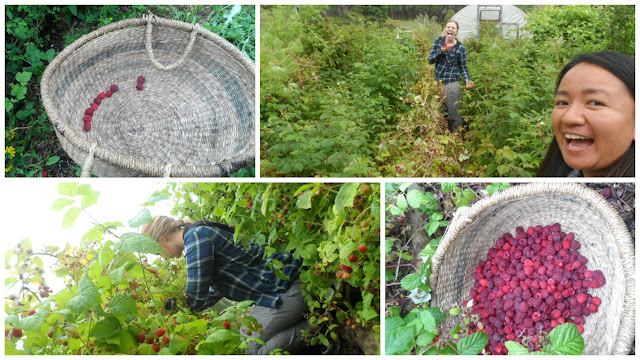 When all was done, we received 4 containers each. 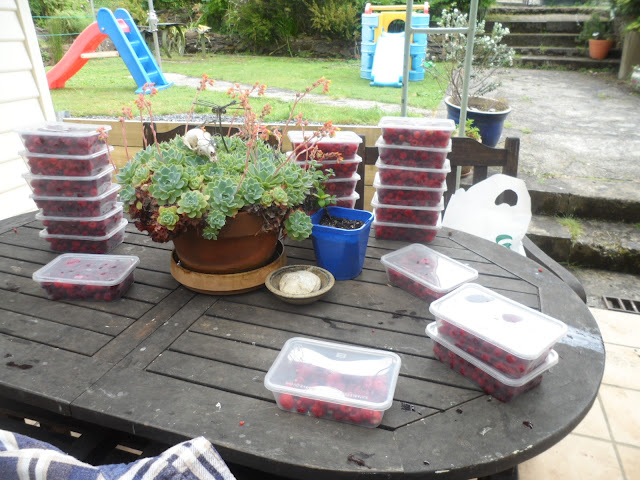 Later in the day, we visited a former in Trevallyn.  As we got off the car, we recognized the house where we previously knocked because someone from the ward list lived here.  We proceeded to knock in nearby houses, the last one was interesting.  The lady who opened the door said, "Hey Sisters, you found me!"  It turned out that she was LDS, Kim, and she had a daughter, Victoria.  They stopped coming to church because Victoria has cerebral palsy and she had a hard time differentiating between reality and fantasy, sometimes she would see zombies trying to eat her.  We talked about prayers and scripture reading.  Kim showed us her quad.  We invited her to read the Book of Mormon and pray always.  As we checked the ward list, we saw her name with note 'moved', so now we could update it with her new address.

Jan 5, Thursday - We had District Meeting today and it was great.  We announced some of the reminders from the MLC which included not having zone meetings anymore.  We also met Paul and Jackie today and we talked more about the book of Ether.  Paul also gave us cheesecake which her mom, Rosanne, made.

We visited a former investigator where we met Sandhaya 10. She's from Bhutan and been living in Tasmania for 4 years now.  She spoke good English so we mostly talk to her while her mom and grandpa listened to us.  We drew the Gospel of Jesus Christ to her.  She told us that they have 3 copies of the Book of Mormon but they threw them out.  Her dad got sick one day and the pastor from another church asked if someone gave them a book.  The pastor told them to throw the book out because it made their dad sick.  The threw the books out and their dad felt better, and so the family believed that the book brought sickness to their dad. Sad.  We invited them to attend a baptism service this weekend and they said that they would come.

We also dropped some Vietnamese materials to Trinh and she was grateful.  We met Dawn but her back was still hurting and told us that we could come around another time.

Jan 6, Friday - We had our last DLC for this transfer.  One of the changes was no more DLC as well unless urgent matters needed to be discussed.  We then joined Sister Baldock for lunch.  She said that her neighbor has a joey which he rescued from a shooter. Someone shot its mom for dog food.  We got to hold it. 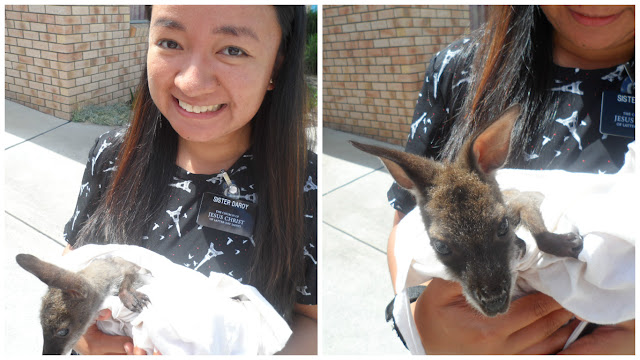 Cutee.. not me, the joey...looking fierce? or scared without its mom?

Sister Baldock was so lovely and shared her conversion story, that it started with Jackie (a neighbor) who shared a Book of Mormon with her. Now, Sister Baldock had grandchildren who are active in the church. It showed how a small action of sharing the Book of Mormon brought blessings not just for her but also for her generations.  She said that she is always praying for the missionaries.

Remember Claire and Kino? friends of Alice and Mason. We tracted their street again, knocked, and Claire opened the door.  Kino was sleeping but we gave Claire a Restoration pamphlet to read.

We also met Brielle in the Scotts home and taught her the Gospel using the footprint cutouts. We then gave her the Book of Mormon Story reader (picture book) for the kids. She was excited to read it. We read a chapter about Faith and Seed and also taught her how to pray. The Scotts told us that Brielle gave us a thumbs up and happy that we took time to visit her.

The apartment fuse blew..and so our lights, too!

Texting...we did not call our RS President

Jan 7, Sat - We helped Sister Roser with the weeding. I almost passed out because it was very hot. She gave us lunch afterwards but more of 'eat and run' because we had back-to-back appointments.

We attended baptism of Chloe Horsman, 8 y.o., and Babi came with family.  We invited Babi last Thursday to witness baptism and now she came with Saha and her husband, Babi's brother and 3 kids. Miracle! They said they enjoyed it and would come to church as well. The kids said they were bored but when Sister Clark told them about Primary, they were excited to come.

We also met Alice and Mason and shared about the Book of Mormon.  Mason had heaps of questions and interested to learn. He said that it made sense that we have the BOM. He talked about his job as a shearer and compared it to our life and Jesus Christ. Some shearers were cruel to the sheep; some nicked sheep so they needed to stitched the sheep causing some sheep not able to walk for days. The sheep experience is compared to the gospel, how the sheep know their shepherd and vice versa, and that some sheep may suffer in life not always because of their actions but because of others, and that we need the shepherd Jesus Christ to stitch us back. We may all go through shearing moments to help us learn, grow and improve.

We also met Ann and her kids - Phoebe, Talya, Gypsy, Alex and her partner, Yogi. We shared about Faith with Yogi. He said that he had been to church with his grandpa and remembered the experience and feelings of going to church. He was kind of scary but he was really nice.  We shared with Phoebe how to pray while the other kids went biking in the yard. We invited Phobe to pray and Ann encouraged her but she was shy to say it so we offered one. They were willing to come to church but they would need a maxi taxi to take all 6 of them to church.  Also visited Inge and shared Mormon Message 'Your Potential, Your Privileges' that in life, we can fully access our privileges when we do CPR (church, pray, read).  She then gave us homemade cookies. Yum..

Jan 8, Sunday - We fasted today for miracles. Church started at 1 pm so we visited some people in the morning in Waverly. We visited Bronwyn and shared more about enduring to the end. She said she knew Christ more than us and no need to read the scriptures. Anyways, after that, we received a call from the Elders that David showed up in church and wanted to learn more.  Babi, Saha and her relatives, Mason and Brielle also came to church. Seven (7) investigators!..and Sharon showed up too. She had not been in church for 12 months with a note in her records "do not contact". During Sacrament Meeting, Sister Burden gave a talk about setting goals. We did not end up teaching all of them Gospel Principles. It was very hot in the chapel and the kids wanted to go home.  We taught Brielle and Sharon with the Scotts about God's attributes, the first lesson in the Manual.

It was so great to see miracles when we fast and pray, such as today.  Seven investigators showed up in church. We were reading about Ammon and Aaron and how their companionship was a success.

We then shared a meal with the Bishop and his family. We also shared about Alma 37:46. Sometimes there are commandments that are easy but are important. We stressed the importance of CPR (church, pray read), even that may look easy, but save lives.Now that we know, we could save other people's lives by sharing and teaching.  Afterwards, we drove to Hobart. 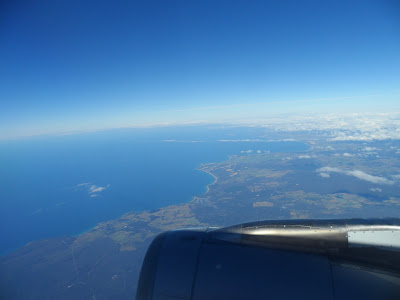 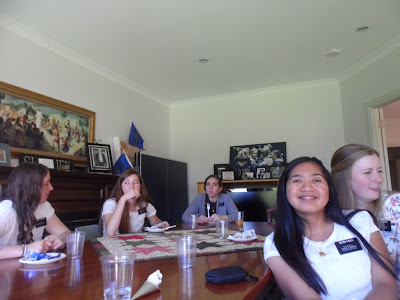 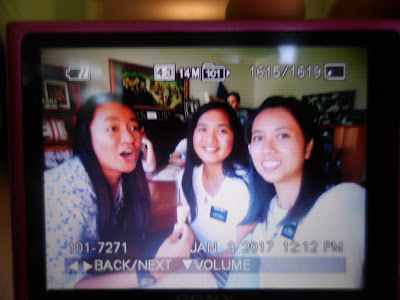 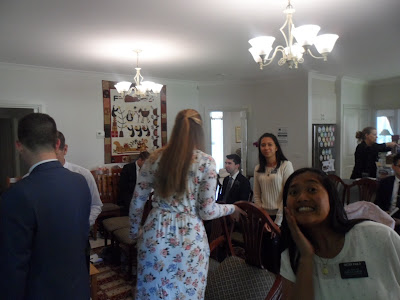 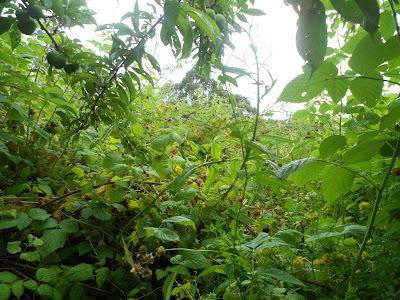