Becoming Gorge-pro, the miracle of finding Christine in Grindelwald, some refused to listen to our message but some showed interest..Happy 1-year anniversary in the mission, Happy new year 2017!


Dec 26, Monday - We hiked again in the Gorge using another trail.  Soon, we would become pro-tour guides here...hahaha. 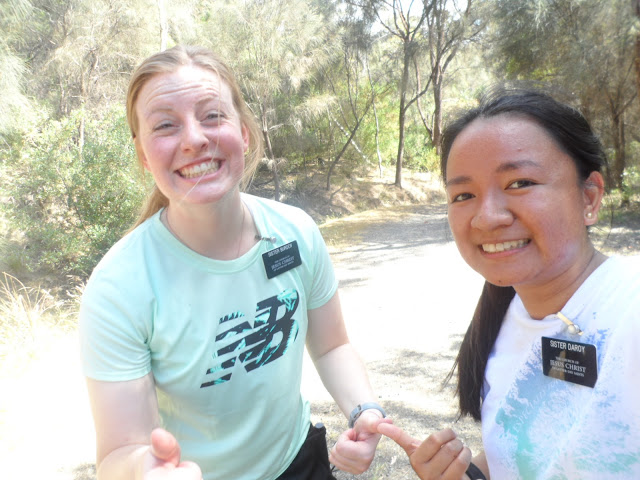 We visited Teresa, Agok's mom, and we talked a bit about God's love.  We understood she was very busy in the hospital and might not catch up with her again until next year.  We also met Mem who had read Alma 18.  We read it again with her and discussed some of her questions.  Though she was still skeptical about the existence of God, we invited her to read Alma 22.

Dec 27, Tuesday - Today, we worked with Maddie.  We went to visit Barry, father of Mark. Mark was in the ward list.  Barry informed us that Mark now lives in Grindewald which is 20 minutes drive. We shared to Barry about the Restoration and he said that it made sense to him to have living prophets.

We then visited some people in Legana, a suburb farther than Riverside, about 15 minutes away.  We tracted and met Brian who was surprised to see us.  For 8 years in Legana, we were the first missionaries who came. He had 3 published books about people who had visions or who were visited by angels.  He had studied about mormonism before and refused our invitation to read the Book of Mormon.  He believed in miracles and religion didn't matter as long as he believed in God.  He was a cancer survivor and did photography.

We also visited a less active family whose father had served a mission.  We shared to them #LighttheWorld even though Christmas was past. The father shared his mission experiences.  The family accepted our invitation to set a goal to improve their family prayers. Sad to see RMs going less active after their mission.

We also visited Sarah, a miracle to have her today because she was always busy, every now and then, flew to Melbourne.  She said she was born in the Church but left when she was 15.  She didn't believe in God anymore but we shared a verse in Alma 26 where it says God is mindful of everyone.  She was nice to us but not interested to learn again. 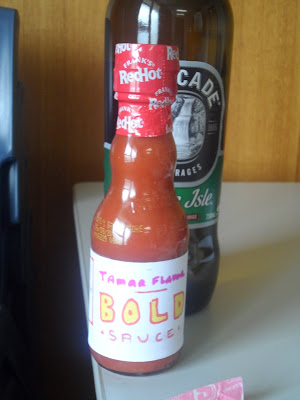 Dec 28, Wed - Had our District meeting today where I gave training on teaching that God is our loving Heavenly Father using BREAD run activity; picked some scriptures that talked about the nature of God and each missionary in the district role played with me (where I portrayed Mem as investigator).  BREAD meant B-background of the scripture, R-read the scripture, E-explain, A-apply or liken the scripture to the investigator or missionaries, D-define blessings/commitment. RUN because those who role-played with had 2 minutes to share or else I would run..hehe.  Anyways, it was a great meeting and the elders shared gifts.  We received BOLD sauce from Elder Payne, to become bold but loving missionaries. We also received a USB containing Mormon messages and church videos that we could view in our portable DVD player.

We visited Ann and shared with her the Plan of Salvation.  She was receptive to our message and would love to meet us again.  She had stopped drugs for 4 years now and desired to quit smoking, too.

We also visited John, Shirelle and Emily.  John was really engaged in the church with his home teaching and the sacrament.  Shirelle and daughter Emily were less active but after our message about Christ being the foundation, they said they would go to church this Sunday..yeay!

Dec 29, Thurs - We tracted Hunter Street in Invermay and we met Michael.  Michael was walking his dog and he's a less active JW..haha.  He used to serve in Iraqi and he said that his experiences made him wonder if there's a God.  He was nice to us, said that we were welcomed to visit him anytime because he was retired, and that he might visit church one day.

Some houses had this - 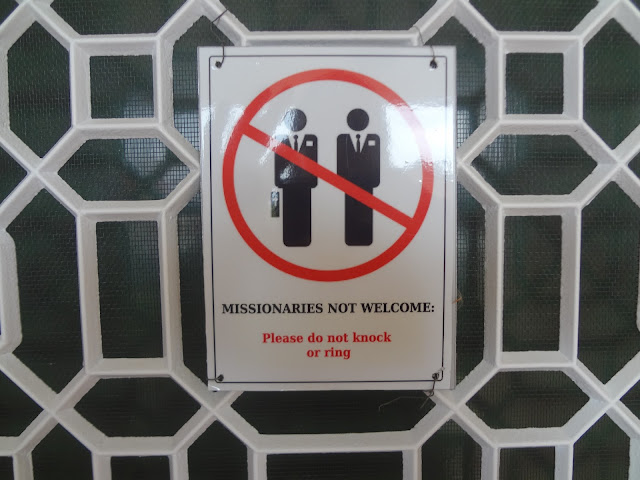 We shared a meal with Jackie today.

Dec 30, Friday - We went to Grindelwald today.  What a gorgeous place, it was like the Swiss Alps minus the snow.  We were looking for Christine in the ward list. The lady who opened the door said that Christine moved to Cul de Sac near this street and that someone might know about her.  We went to that place and found out only a 50ish million houses.  We tracted and asked if they know Christine.  After 3 houses, we couldn't possibly knock all houses in this very hot day.  We said a prayer and picked a house to knock.  Miracle, the guy who opened the door knew Christine.  He said Christine lived 2 houses away.  We invited him to listen to our message but said he was SDA and not interested so we thanked him. Beside this man's house was an empty lot so we knocked on the 2nd house after the empty lot.  No one opened, so we left a note and walked back to the car.  Then we thought of knocking on the house beside the empty lot and still use "Do you know Christine?" script to open the conversation.   Turned out, the girl who opened said, "hang on, I'll call her".  What a surprise!  Finally, we met Christine but she said she was not interested to learn again.  That day, we learned that God does answer prayers.  We prayed specifically to find Christine, the 2nd house we thought was the right one wasn't after all, then we put more effort and knocked one more and we found her!

We tried to visit more members in this suburb as we will not be driving this far often, but they were not home.  We talked to this guy painting a fence and asked him if he knows anyone who might be interested to listen or learn.  He said to visit the 2 houses beside him.  We knocked at this house and met David, a born-again Christian.  When we introduced the Book of Mormon to him, he said, "Can I have one? I want to read it."  We answered, "YES YOU CAN!"

We visited Mem again today and she told us that we better give up on her. We felt like she recognized God and answers to her questions but did not want to act on it or change.  She told us that we were still young, should explore the world and get out of our mormon bubble. We knew we were planting seeds..maybe she would be ready sometime, somewhere. 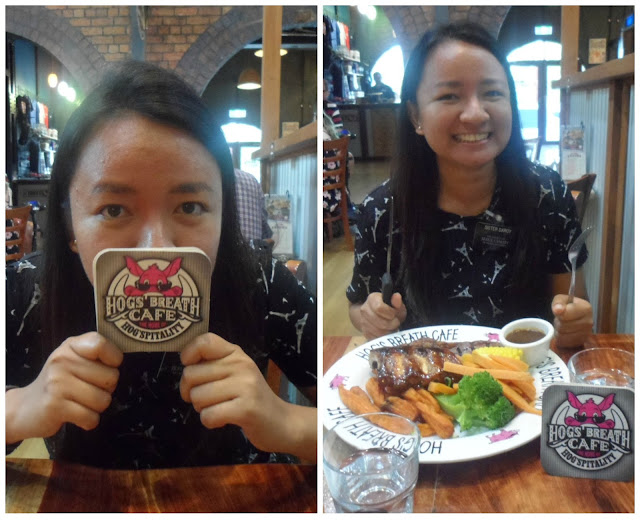 Dec 31, Sat - Bread run today. We also visited and shared a lesson with Alice and Mason. Mason said he had an aunt in Nigeria who is LDS. He saw missionaries, never had a lesson with them, but wanted to learn about the doctrines. Alice and Mason were planning to get married in June because they wanted their baby to grow up in the church.

We also visited Willard and Ruvinbo and found them eating tea (dinner) with their oldest child, Precious.  Now, we've met all of them - Precious, Providence and Perseverance. Haha. Willard said he did his commitment and mowed the neighbor's lawn, from the 25 ways #Light..haha, he was really good.  We found out that they knew the Tarawhally, their hairdresser as well. They just connected the dots that this was the church that Asanatu told them about.  Wow, Asanatu was a good member missionary in her own way when she did hairdressing in her house.

Before going home today, we decided to visit one more house in the ward list, but turned out that they moved and so we met Trinh, a Vietnamese.  She had no religious beliefs and we taught her how to pray and she prayed.  That was really cool even just teaching someone to pray and was keen to do it.  Trinh was doing her PhD in Aquaculture, did not go to any church or joined any because of language barrier.  Her husband did not speak much English.  If they would move to Footscray, there were Viet-speaking Elders there.


NEW YEAR was coming - saw some fireworks from our flat at 9:30 pm..at 12 midnight, too! My comp tried to wake me up, I stood and watched for 2 seconds, the I fell to my bed...haha..couldn't be bothered.

Jan 1, Sunday - Alice and Mason came to church today. We had our first Gospel Principles class here in Tasmania - Sister Burden and me - and we shared the Restoration using the cups.  Sister Bec was with us and she bore her testimony.

We also talked to Brielle, 10y.o. if she would love to have us share some lessons and she said 'yes' and so we set appointment with the Scott family.  We visited Evandale and had dinner with Bishop and the Clarks. 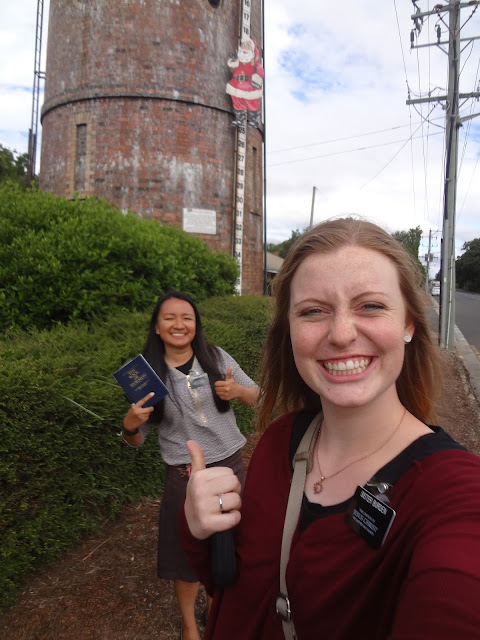 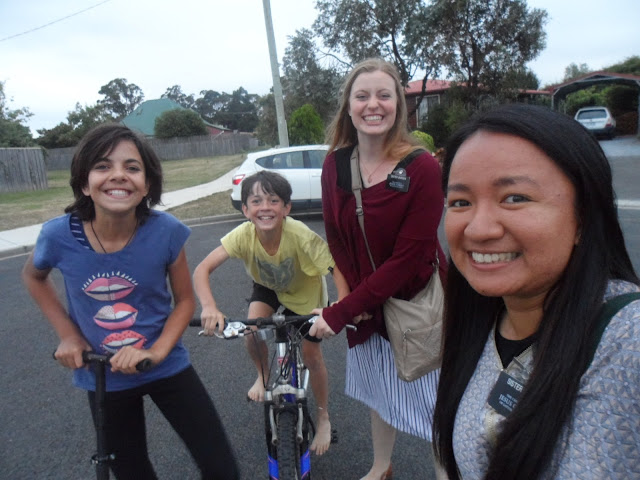