Nov 14, Monday - I feel blessed to fly to Melbourne with Sister Tupu to see her off and meet my new companion. Sister Jackie dropped us off at the airport.  This would be our last plane ride together, flight was delayed so we talked some more. 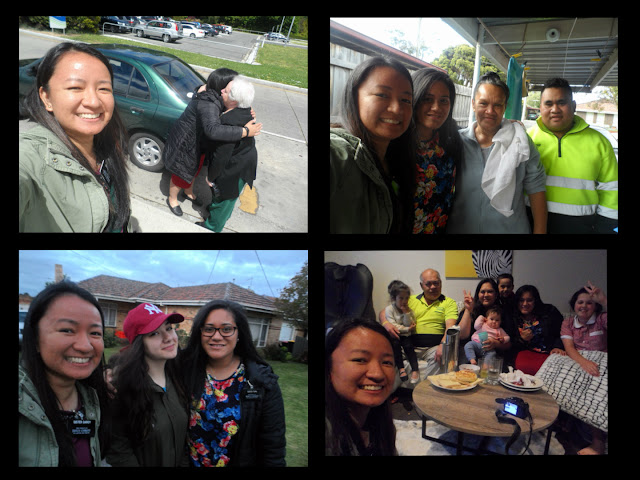 In Melbourne, we visited the people / families whom she met in her areas such as the Barber family in Dandenong and Leilana (with red cap).  Sister Tupu had taught Leilana who just had her baptism. While with the Barber family, we had the opportunity to teach their neighbor, Maddi (girl in pink), and she was interested to learn more. 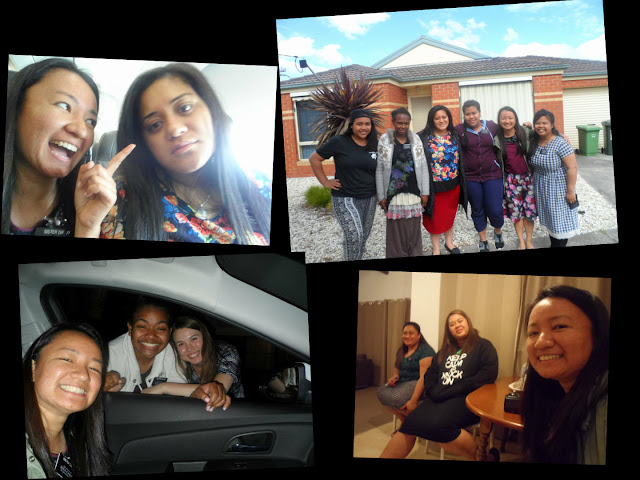 Sister Tupu had also the chance to say her byes to the Craigieburn Sisters Cruz and Bajamere and the Tullamarine Sisters Faiga and Solo. Also stopped by the STL East flat to grab some blankets - Sisters Shaub, Dulaki and Teriipaia;  visited the Hampton Park's Sisters Leilua and Falani, and; slept at the Wantirna Flat.

Nov 15, Tuesday - Temple Day with Sister Santos and Sister Tupu. I felt privileged to be at the temple with these two great missionaries before they would leave for home. 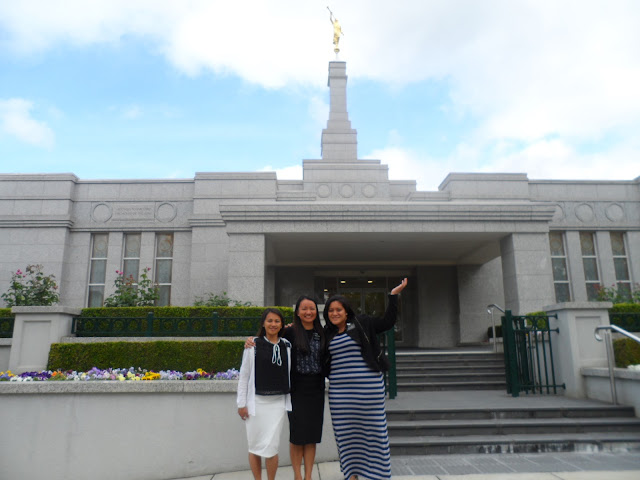 Then I met my new companion, Sister Burden, MTC batch with Elder Henderson and Stevens, after 10 months. 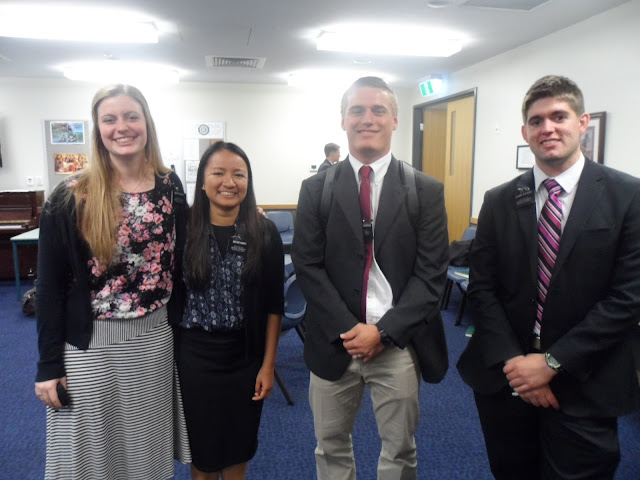 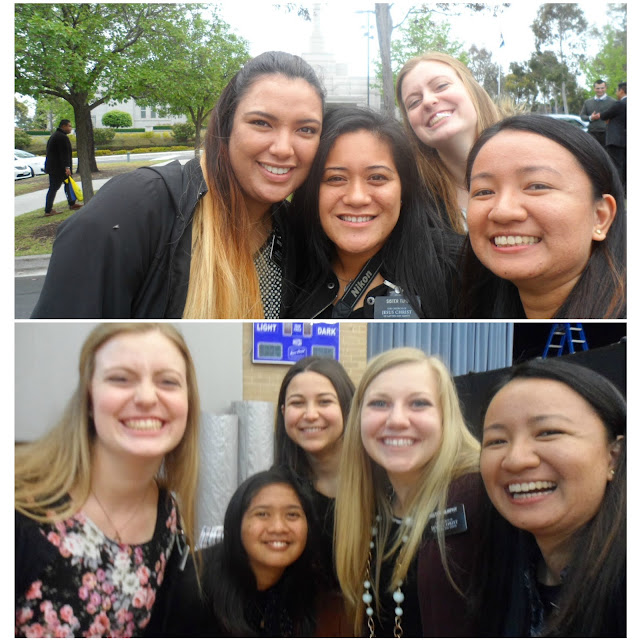 Sisters Haenga, Tupu, Burden and Me..
Sisters Burden, Paulo, Ihaka, Murphy and me.  Sisters Murphy and Ihaka would be going to Glen Huon area. 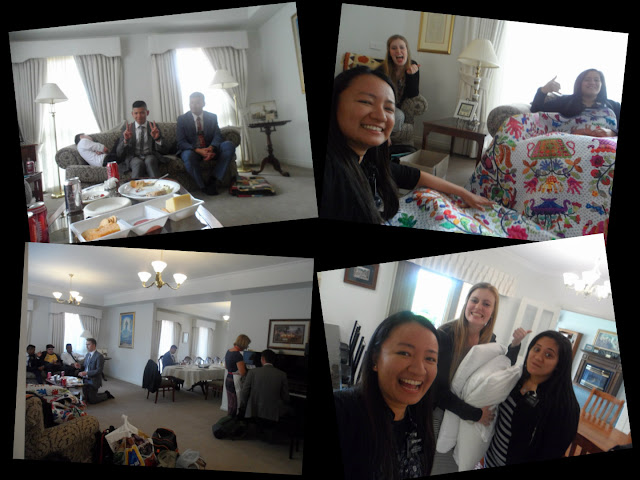 At the Mission Home, departing missionaries waited for their turn for interview with President Vidmar.  Sitting by the piano is Elder Bennion, the new AP serving with Elder Howell. We also grabbed some beddings from Sister Vidmar since there will be 6 more sisters sleeping at Wantirna flat tonight.

Nov 16, Wednesday - the day to send off the departing missionaries to the airport..my goodbyes to Sister Tupu, Sister Santos, Elder Puing and the Linders..all baggages ready and the bus to take us to the airport. 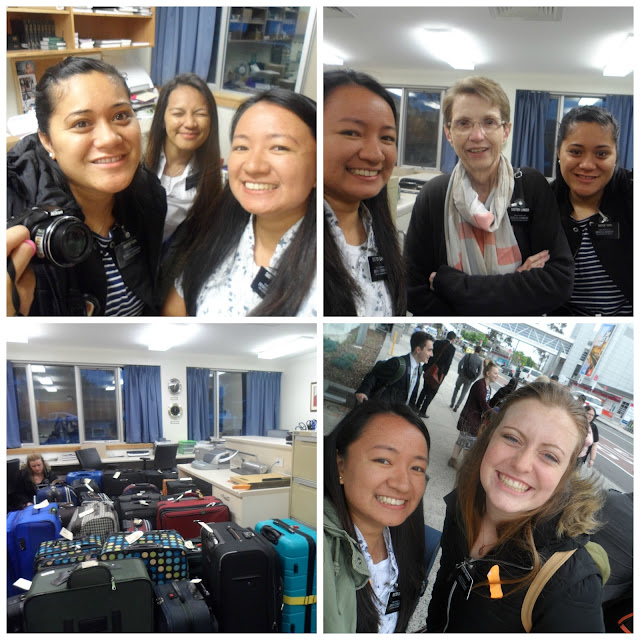 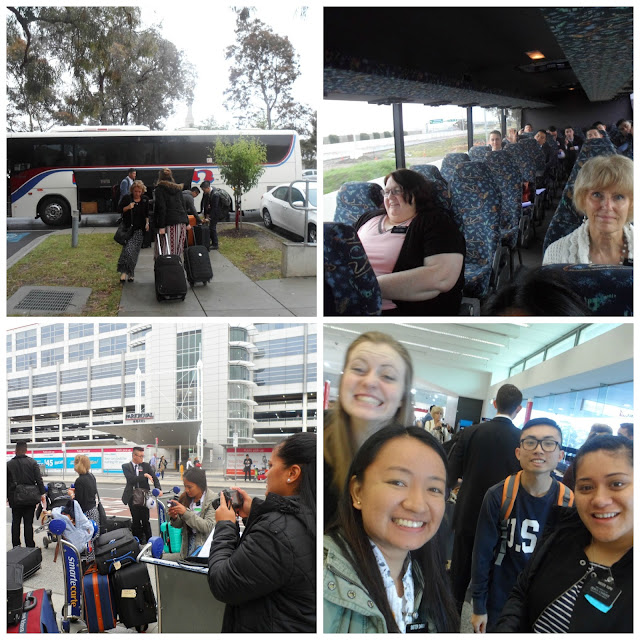 After dropping Elder Puing, Sister Santos and Sister Tupu at their respective departure areas, we (4 of us for Tasmania), went to our gates and had brunch. We met Martin and talked to him a bit. 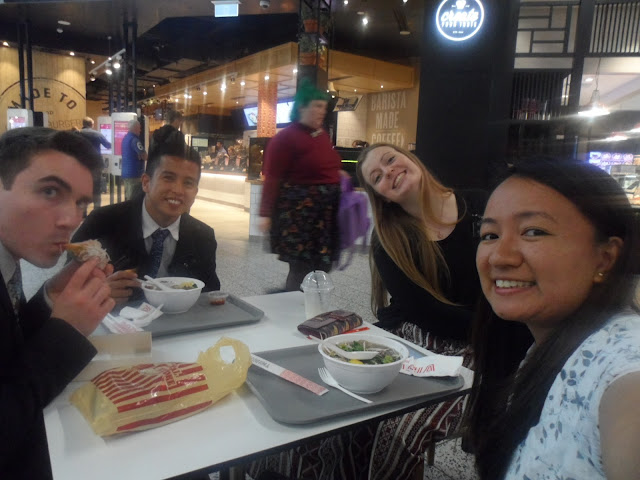 Photo: Elder Nilsson from Nova Scotia, Elder Parone, Sister Burden and Me
At the airport, we also met Stake President Smith of Hobart and also Monson who was visiting his fiancee in Tasmania. 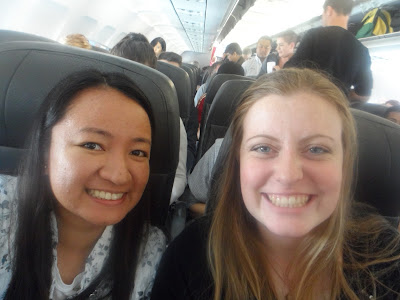 My first plane ride to Tasmania with Sister Burden. Jackie picked us up from the airport. She gave me a Tasmanian devil stuffed toy while Sister Burden received a Wombat stuffed toy.


Our first stopover was Sister Penny and we shared Alma 26:37, that God is mindful of everyone.  Sister Penny still talked a lot and sharing her experiences.

We also visited Kathy and Lucas and shared Restoration. Kathy was beginning to understand the role of prophets and wanted to come to church but needed a ride. Lucas was hyper as always.

We were looking for Adrian, a former investigator but found Karma and Tehring instead. They moved in to the address 8 months ago. They invited us in and asked us to share more about Jesus Christ. They are from Bhutan, had 3 siblings and 3 more lived with them. They wanted to learn more. Miracle. When we showed the picture of John the Baptist and Jesus Christ, Tehring asked if John the Baptist would slap Jesus.  We told him 'no', that his arm was extended because he said a prayer before baptism. Sometimes, we did not realize that some people who were still getting to know about Jesus Christ would have different views of pictures and things.

Nov 17, Thurs - We ran Balfour; Sister Burden ran up 2/3s while I died catching up with her..hahaha..We made it a goal to run Balfour 2-3 times next week. 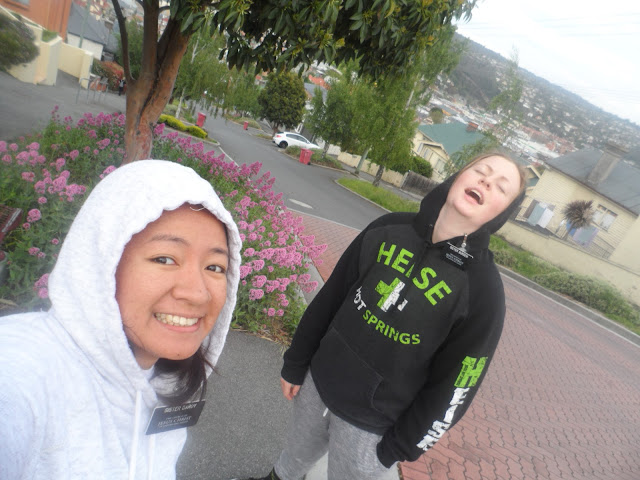 We visited Paul and Jackie today and talked more about the Atonement using the True to the Faith book.  We then visited a few more people who lived nearby, then went back to help Jackie prepare dinner for tonight.

We had dinner with Jackie and the Johnstones and shared about the Tree of Life and how Lehi did not notice the filthiness of the water because his mind was caught up with important matters.  If our focus is on things that matter - family, gospel, etc., we would not even bother to look at the filthiness of the earth.  Then we attended the Ward council.

Nov 18, Friday - We went to the addressess of some referrals this morning but no one was home so we tracted along the street. We met Hengma from Nepal and she said that we could come back and share more about Jesus Christ.  We also met Helen, a less active who told us before that she was not interested in having us, but this time, she was nice and wanted to come to church next Sunday. We shared  Alma 26:37 and that Heavenly Father always watches over her and her family. She then shared experiences of how God is mindful of her. It was amazing to see the change in her.

We then visited Leanne, a former investigator. At the end of the message, she was teary-eyed and thanked us for reminding her of the right path.

We also visited the Tarawhally and met their friend, Cynthia. Cynthia gave us her details and that she would love us to visit.  We shared about Prophets with the family. Then we got a text message from Bishop that Alice and Mason just had their baby. 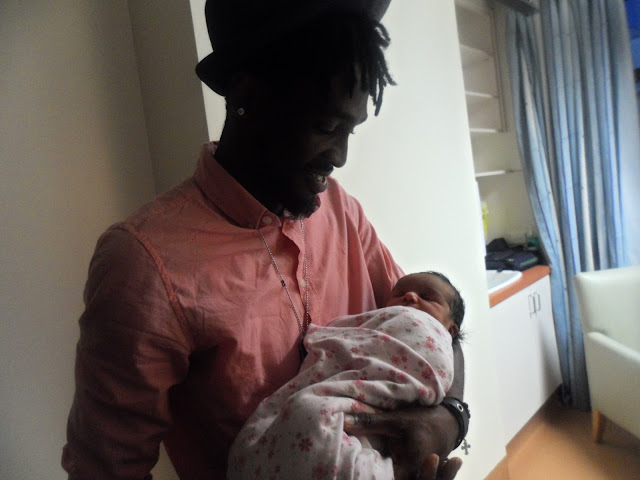 Learned this great message from Elder Haight - Live so your memories can bless the full length of your life.  Live for that glorious day when you will go to the Holy Temple for eternal blessings and joy. 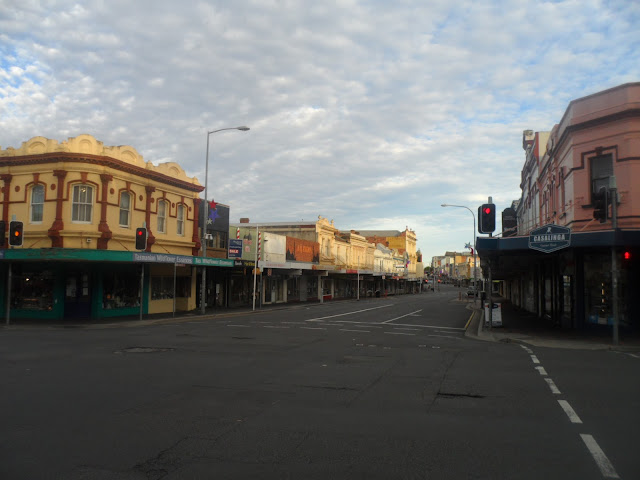 Today we did our bread run.  We were able to meet people and neighbors whom we gave bread. Miracle. We dropped bread to Cameron and he told us that his neighbor might need bread too. I was a bit hesitant because we asked that neighbor before and refused our bread, but when we knocked, we found out that a new family had moved in. We met Kathy and she said that she just ate her last bread this morning and did not know what to eat for lunch. The bread was a blessing to her even though she said that God never answers her prayers. Miracle.

Had lunch at Paul's BBQ and met his Mom..and a delicious home-made cheesecake.

We picked up Maddi after lunch because she would be working with us.  She returned from her mission a year ago. 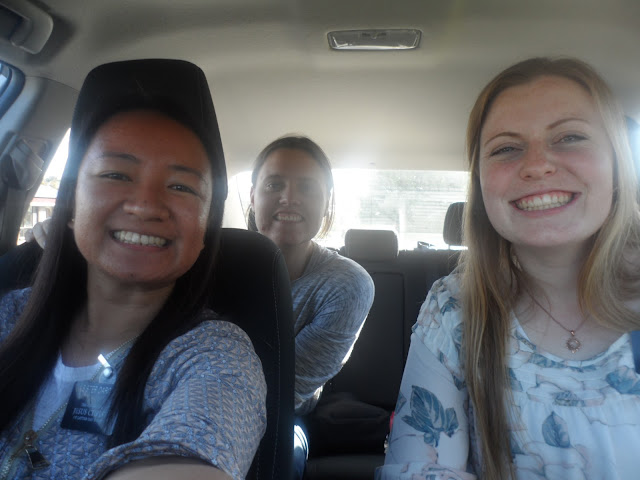 Got a ticket to Chelsea's birthday party..helped Bishop decorate the cake. 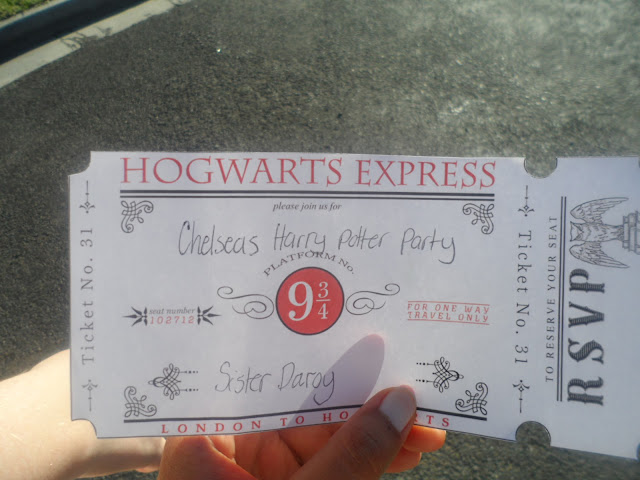 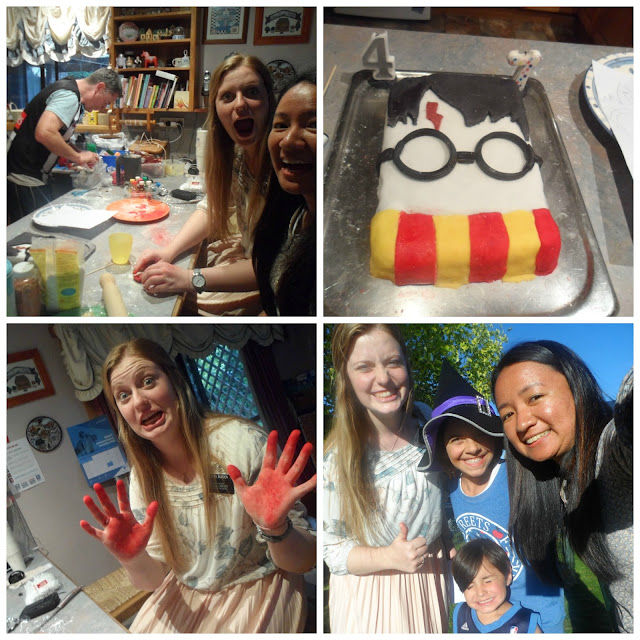 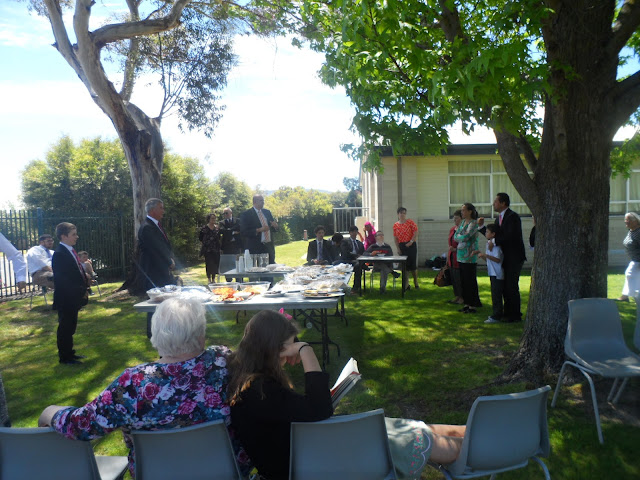 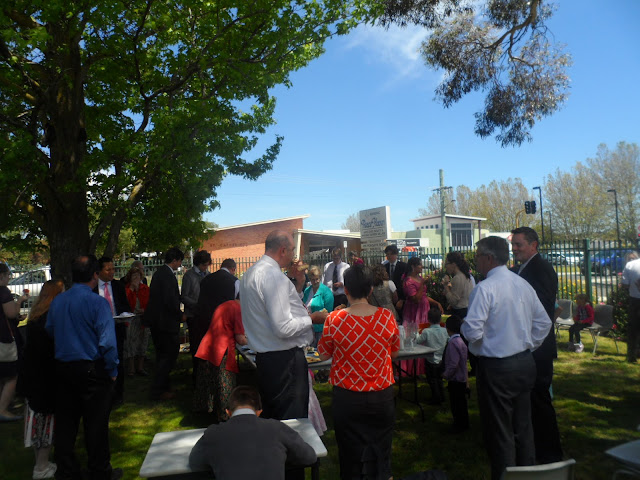 Lots of miracles this week..
Posted by Sister Norre Jayne Daroy at 16:00