Oct 24, Monday - Bro. Johnstone helped us changed our car's tire.  Then they drove us to Cradle Mountain. 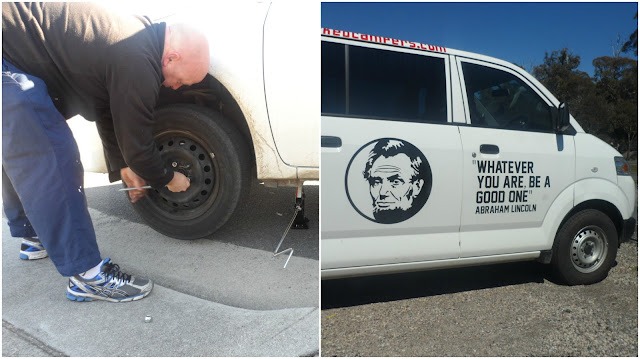 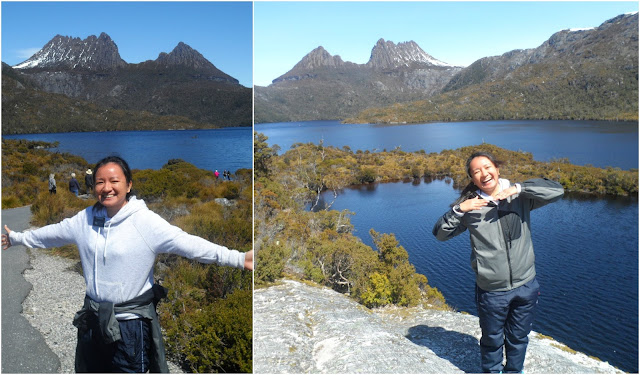 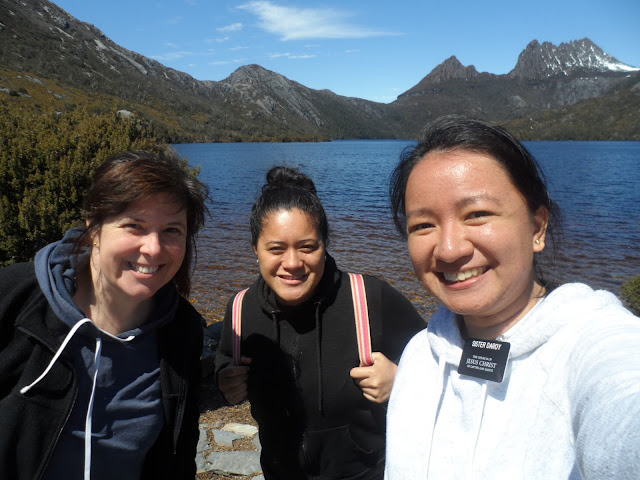 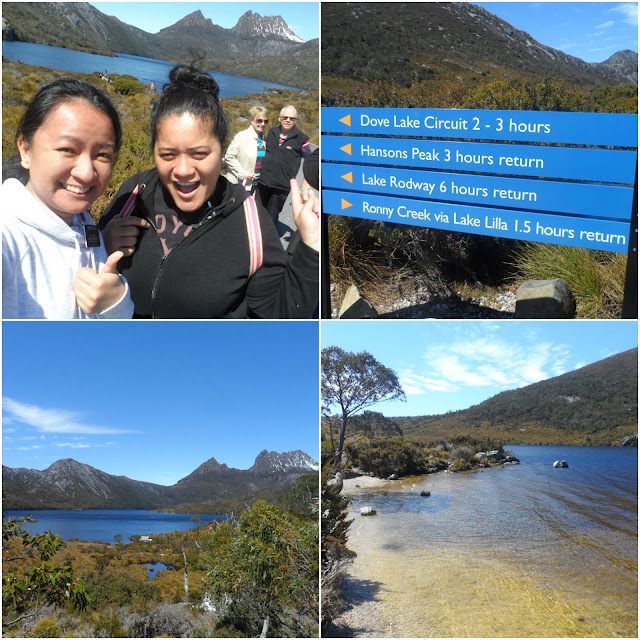 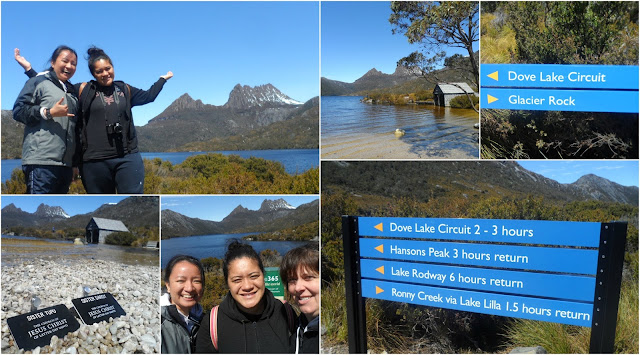 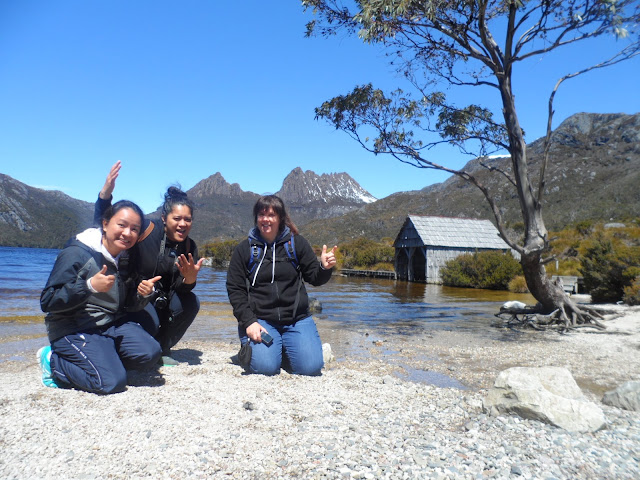 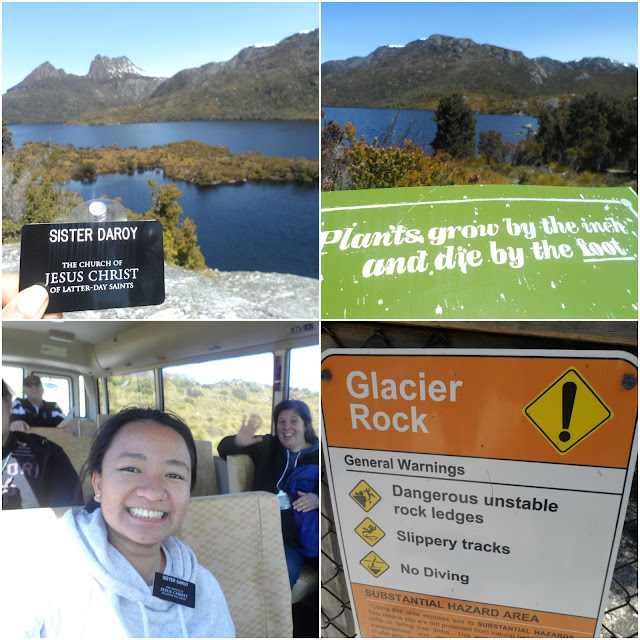 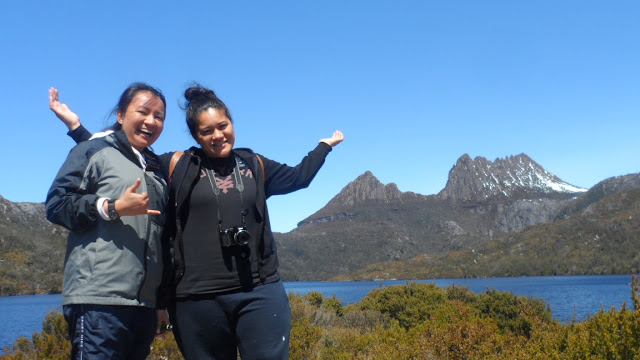 Sister Johnstone encouraged us to show the place to other missionaries, too, paying it forward.

Then we had dinner with the Barnett family.  Bro. Barnett was the second counselor in the bishopric.  Sister Taylor joined dinner too.  Bro. Barnett let us sign his special map which was also signed by previous missionaries.  We shared John 21 which teaches that to show our love to the Savior, we must heed His invitation to feed the sheep.

After dinner, Sister Tupu washed the car.  Now I needed to hide the camera and help her..haha.. 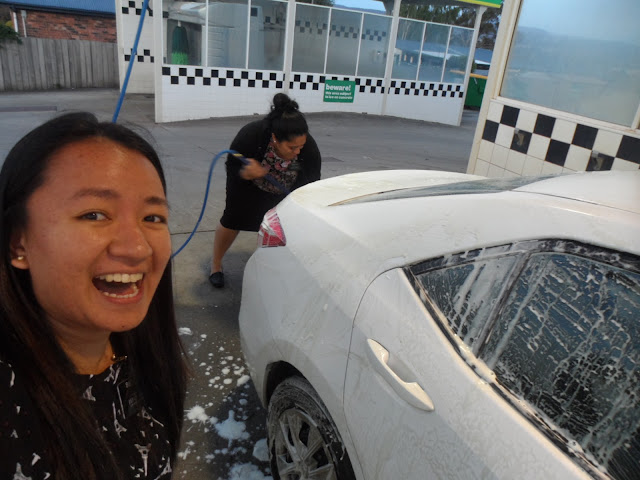 Oct 25, Tuesday - Heading to Devonport for our District Meeting.  On the way, we drove past the Big Cherry.   I've seen the Big Strawberry, now the Big Cherry. 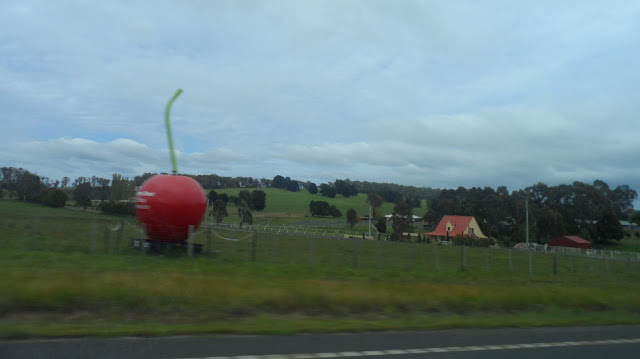 The view from the chapel. You can see the Spirit of Tasmania (ship) that ferries cars back to mainland from Tasmania. 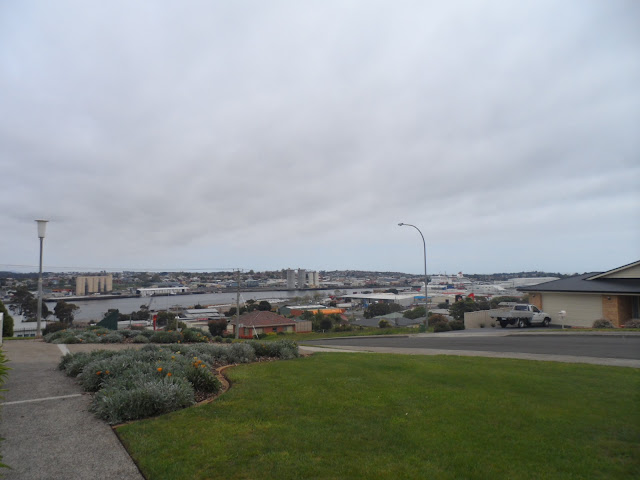 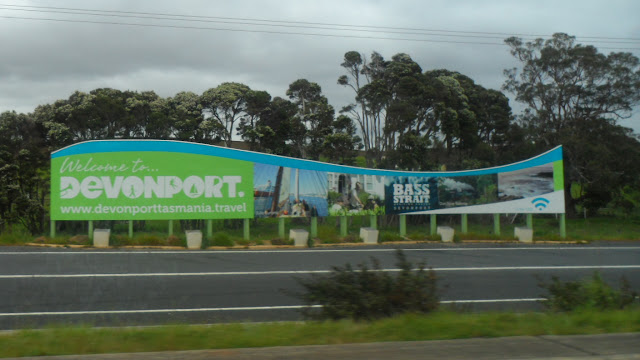 With Elder Valenciano and Elder Barrozo after the District Meeting.. 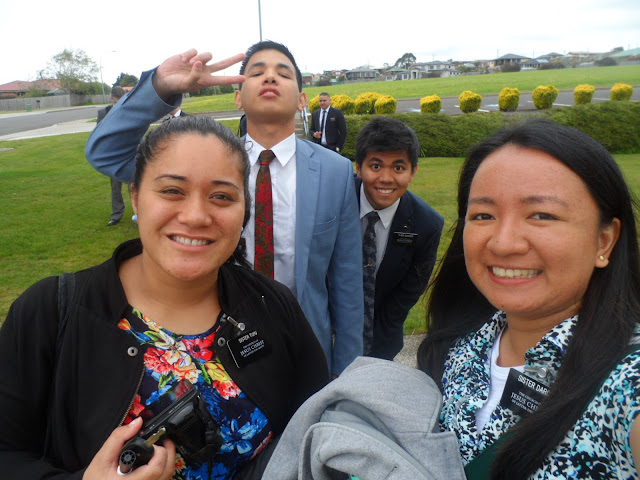 On our way back to Launceston, we stopped by the Raspberry Farm. Got free taste of chocolate raspberry..yum,yum. 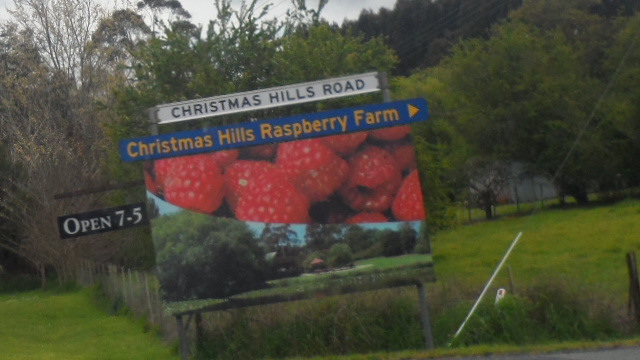 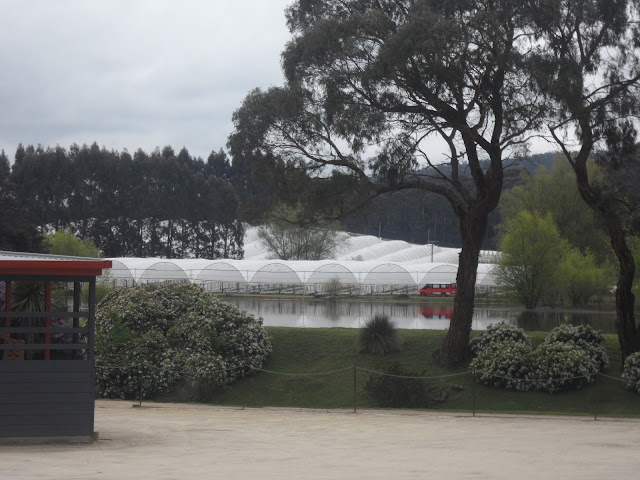 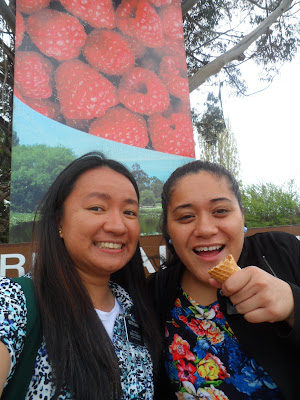 We then went to the tyre service to have our tires fixed. The servicemen told us of 1 missing nut on the rear right tyre and all other nuts were put backwards. They told us that the tyre could have come loose, that we were lucky it didn't. My comp and I knew that the Lord protected us and kept us safe, the power of prayer.

Then we helped Sister Roser with her spring cleaning by moving furnitures and other stuff and assembling a bed. Then we shared Mosiah 2:41 and followed up on her friend Simon who's in Hobart at the moment.


Helping Sister Roser; Sister Tupu was trying to figure out what this thing was.. 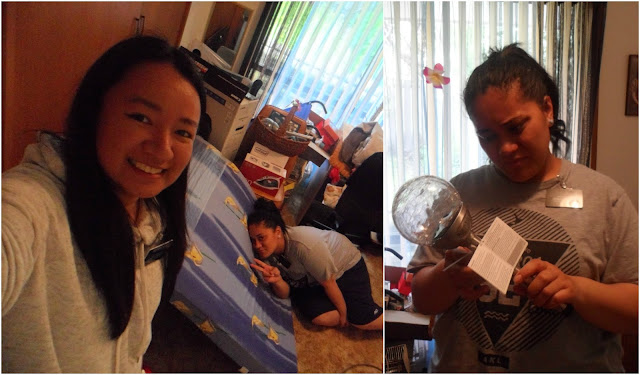 We also visited the Barnes family, 3 kids. The kids are so fun and energetic. We had a wonderful meal with them, then we shared the Seeds of Faith analogy on how we can strengthen and nurture our faith.

We also met Peggy. The previous missionaries had been trying to catch up with her but she was busy and I finally got to meet her. She's LDS, managed a maintenance company with over 100 staff, had some struggles. We shared Mosiah 4:9 with her.

Oct 26, Wed - Today, we traveled to St. Helens which was recently opened to missionaries. East coast driving, very beautiful. We saw a black snake on the road and almost ran over it. It was shiny and I asked my companion if we can turn back so that I could take a photo. She said No..huhu..I don't know where I got my enthusiasm..haha.. 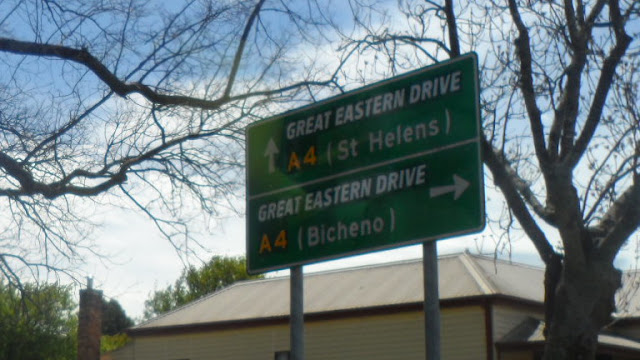 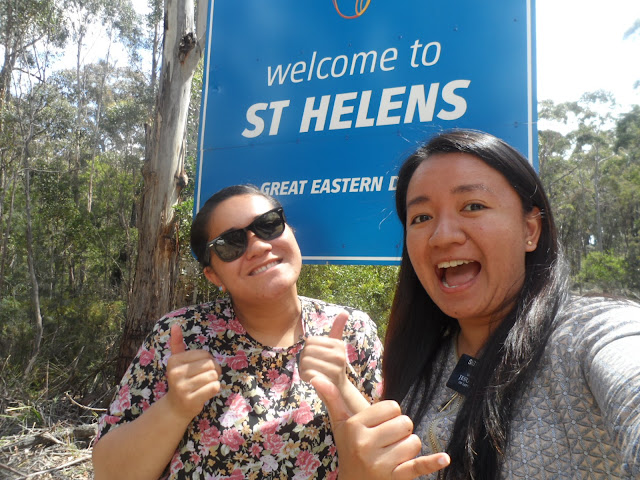 We were meeting the Sandy Bay Sisters at St. Helens but we forgot to tell them that there would be no phone reception. By the time we called them, we couldn't contact them anymore. When we got to St. Helens, we tried to look for a white car, in the hope of finding them. Then we spotted one and tried to see if there was a BOM or a picture of Jesus Christ inside. I spotted Sister Pratt's jacket and then we left a note in the window. As we drove away, we saw them in the Chinese restaurant and so we joined them with our packed lunch. Sister Roberts said that she was about to freak out that we might not find each other. The Spirit guided us.

We did exchanges - Me and Sister Pratt while Sister Tupu was with Sister Roberts. Sisters Tupu and Roberts stayed in town and did some tracting and finding. Sister Pratt and me drove to other suburbs 20 mins. away to follow up on the new contacts that the previous missionaries found last transfer. We met Dylyn and had a lesson with him. He asked when we could meet him again, but it was uncertain to set a return appointment because we did not know when we were coming back, so he gave his contact number. I also met a Filipino family and lots of people. We gave away 2 BOM and few pamphlets. I believed the area was ready to accept the gospel.

Sister Pratt was trying to get a snail off the wall..haha..by the way, she is a direct descendant of Parley P. Pratt..how cool is that! 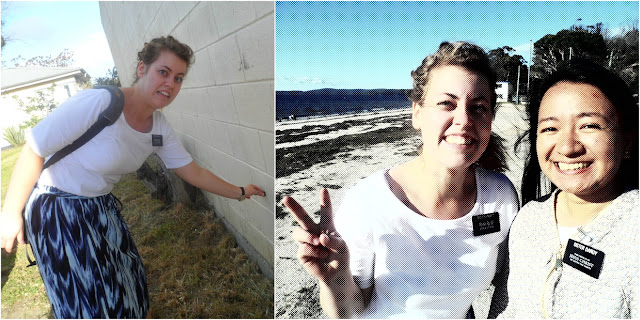 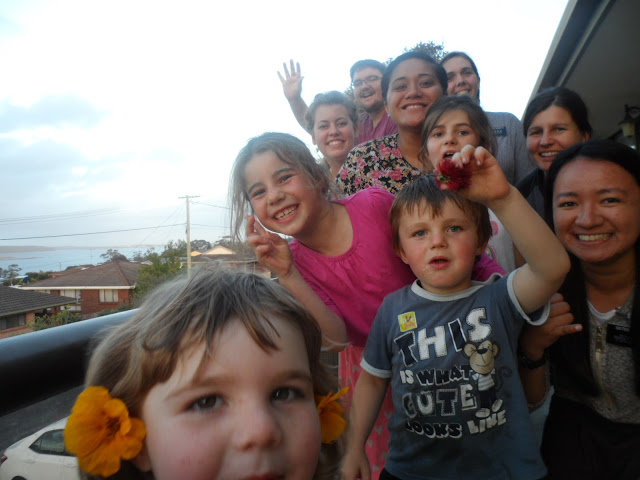 This is the Terry family. Bro. Terry is the only priesthood holder in this area. He's a bank manager and was offered to work in Hobart or Launceston but he decided to stay to help the ward grow. Because it's a 2-hour drive to the chapel in Launceston, Bro. Terry did sacrament meeting in his place with other 3-4 members (twig coz smaller than a branch). We were working towards having a branch in this area.He had lovely kids, raised well, knew the gospel really well.

We spent the night with the Terry's. We slept in the place where they hold Sacrament meeting. 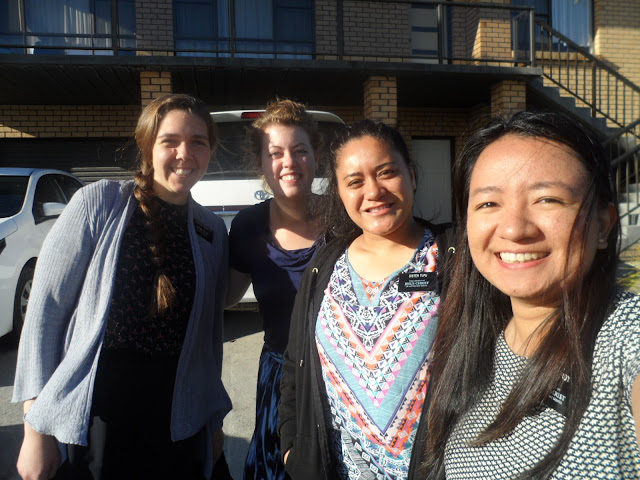 Time to go back to their area, so we said goodbye to the Sandy Bay Sisters. We were grateful for their help. Sisters Tupu and Roberts found James who was willing to be baptized, asked where and we answered beach, but could not give him a date because we were not sure yet when to come back. 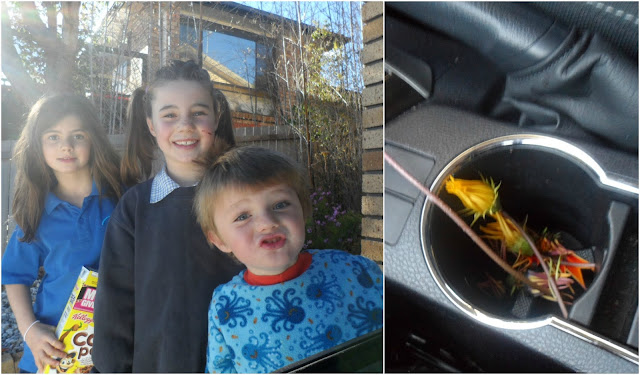 Hanisi, Milly and Chester did not want us to leave. Chester gave us flowers.

We went to Scamander Pelican Beach Park and did our studies.

We had an appointment with Sister Bogar whose husband is not LDS. they lived 20 minutes away from St. Helens. We stopped by this farm near the Bogars place.