May 30, Monday - My last day in Footscray, had lunch at the Delos Santos home with Sister Albania, Sister Cruz, Uncle Bob and Stephen.  Mommy Nessa cooked kare-kare (special request from Sis Albania), tocino, pizza, and meat pies.  After lunch and goodbyes, we dropped Sisters Albania and Cruz at the Footscray station.  Sister Albania would be done with her 18-month mission and would fly home to Philippines on Wednesday morning. 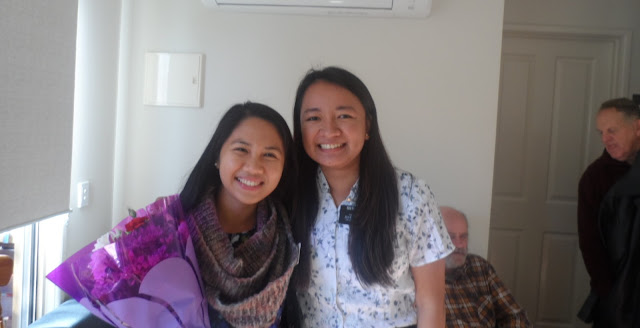 This was my last photo with my mom, Sister Albania.  She had been a great companion and an example of an obedient missionary.  She taught me a lot of things. I loved her and would miss her but I expect to see her during her wedding if she would invite me..haha..

We then had Cottage Evening at Bro. Foster's house, my last cottage evening with them. Uncle Bob and Stephen gave me letters, gifts and flowers. I would miss the "cottage" group, whom I had wonderful memories. Bro. Foster called me a "scriptorian" because of me being able to quote scriptures fit to his lessons. When he asked me what scripture I am thinking, then I knew and would quote the scripture to him, that's how the Spirit works. I would miss the Delos Santos family, Uncle Bob and everybody.

When we returned to the flat, I packed my stuff.

May 31, Tuesday - Today we drove to the Mission Office. I attended training for leaders which lasted for 2.5 hours and met my new companion, Sister Wairepo.  I also returned the keys and the car to Elder Gourie.  I was sad to be separated from my (the) car but good thing that we cleaned and vacuumed it.  Elder Gourlie was pleased and said "very good"..haha..

Sister Wairepo drove me to my new area - Tarneit and Werribee.  We covered Werribee Ward because we are short of sisters.  We dropped by our flat first to put my stuff in, then to our appointments.  Sisters assigned in Griffith (7 hours from Tarneit) were with us, both Samoan, Sister Faiga and Sister Falani and dropped them to some of our appointments. 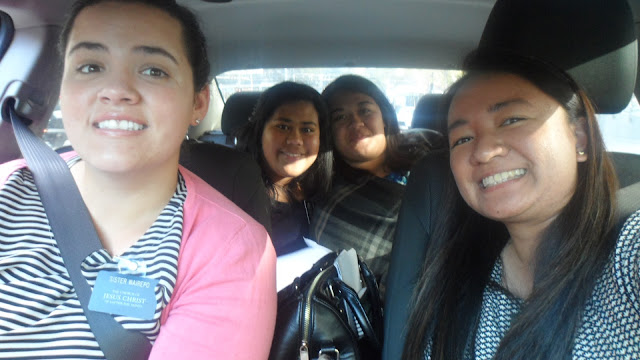 We visited Jean Croft, her same gender partner died.  She was willing and happy to have missionaries around but she didn't want any commitments.  She believed that the church is only there for power.  We also visited some less-actives in Werribee.  After dinner, we went back to the flat and planned.  My challenge in my new area would be to familiarize the area, investigators and members of Werribee and Tarneit.  Below is our area map. 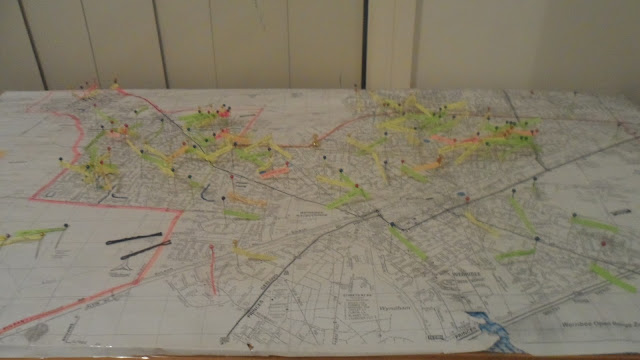 June 1, Wednesday - We walked to the park at 6:30 am.  It was pretty cold. After the regular studies, we then visited Aniva but since she was going out, we rescheduled. We then visited Donna, a returned missionary having depression struggles. Her mom Rebecca was very faithful and loved family very much. We invited her mom to work on Christlike attribute with us for 6 weeks and taught her today while Donna left for some errands.  She also invited us to for Family Home Evening with her family.  Then after lunch in the flat, we brought the Griffith sisters to the Southern cross station where they would catch train, then bus, back to Griffith, travel time would be about 8 hours.

After dropping the Griffith sisters, we then drove to the Mission Office to pick up the Goldens (missionaries right from the Missionary Training Center). I felt like I was golden as well.  I met the new sisters and elders.  They all bore their testimonies at the end of the meeting.  They were given orientation same as me five months ago, just felt like a flashback.  One of the privileges of STL was to be able to eat the food the goldens ate as well.They had KFC so we were able to grab some KFC as well.  We had the Sunshine sisters in the car so we drove them to their flat, put their stuff in, then to their bishop's home.  The Golden sister looked tired but was excited to meet the bishop at 8pm.  She said she was awake in the MTC since 3 am. 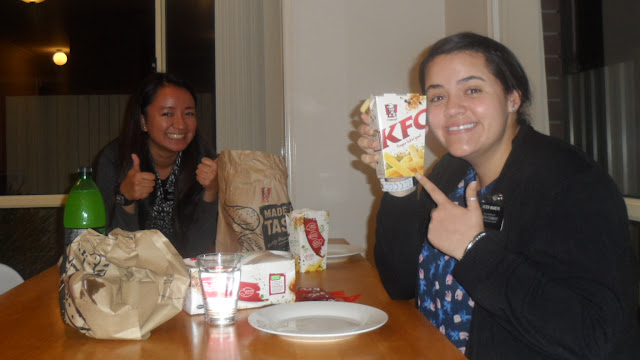 June 2, Thursday - District Meeting today and I was welcomed to Wyndham Zone by Zone leaders, Elder Bennion and Elder Whiting. They said that I was in the best zone and I replied, "of course, it's the best zone because I am here now."  They laughed, haha..  We left the meeting 30 minutes early for my dental appointment.  Since the dentist was only a minute away from my previous flat, we had lunch with the Footscray sisters and happy to see my previous companion, Sister Santos.  After lunch, we went back for Sister Wairepo's dental appointment as well.  We then visited Zafrinia and her sister and role-played with them. We let them teach us which they did well.  What followed were visits to some referrals in the area and weekly planning in place of the meeting with the ward mission leader which was cancelled.

June 3, Friday - At 10 am, we cleaned and vacuumed the chapel and that was our service for the week.  What followed next was the DLC (District Leadership Council) where we met with the district leader, Elder Liu, and the zone leaders.  We talked about how we can achieve mission goals and how to motivate missionaries in the zone.  Being STL, we looked after the sisters in the west side area.

We went to visit one investigator Debora but she said she wanted to coast along.  It was sad having investigators drop us but hoping that she would be ready to accept the gospel by the next set of missionaries.  The next visit was for the 3 children - Judy, Rachel and Llyod, whom we taught using Preach My Gospel.  Each one would teach us every week using the lessons we taught to investigators.  Judy was very shy, the only who wasn't baptized yet, and so we were working on a baptismal date for her.  Then we visited another family, the Wyse family, played the Plates magic trick with them and they loved it.

Sister Sao was on our meal roster and she gave us KFC for dinner.  In this area, we would be fed with KFC heaps. We also visited Kristy (14) who was recently baptized.  We invited her to do her family history as part of her preparation to go to the temple and do baptisms for the dead.

June 4, Saturday - It had been raining since the past 2 days but rain or shine, missionary work must go on.  We were visiting former investigators when we met Jazz.  His brother was taught by the missionaries but not anymore because of his internship which was not in Melbourne.  We also met Jenti and taught her about the foundations of the church.  She was great and wanted to be in church and be an example to her family.  Then there was the Moala family, Samoan.  They served us coco Samoa, which tasted like sikwati (Philippine cacao drink) and really good.  We also played the Plates magic trick, which taught a lesson about seer and prophets.  Then at dinner time, I did not feel well, had a really bad headache and stomach.  At first, I thought it was the weather.  We then visited Vini and played with her another magic trick called Spirit stick, which showed how the Spirit works. I had been learning different ways to share a lesson with Sister Wairepo.  We did language study at 8 pm where she had me read talks from the Ensign aloud and corrected my dictation.  I also tried to copy her accent which was pretty fun.

June 5, Sunday - Today, we attended Werribee ward at 8:30 am, then Tarneit ward at 12 noon, two meetings in a row.  In Tarneit ward, the bishopric invited me to introduce myself and bear my testimony, and so I did. I met a Filipino family with surname Salvo.  We also taught Young Women class about sustaining church leaders.

After church, we invited Rey, a recent Filipino convert, to come with us to the missionary fireside.  Rey had been to a lot of things and said that he could not come, but later decided to get ready and put on his suit..a miracle! 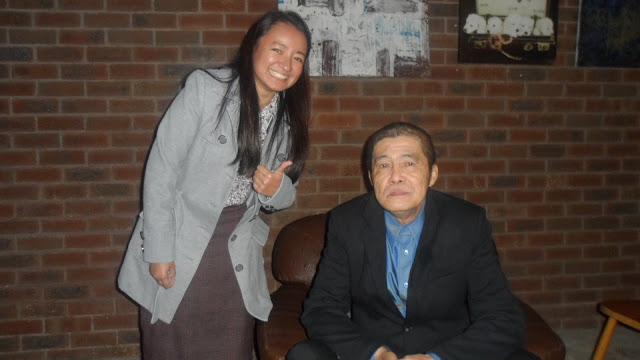 With Rey, a recent convert

Today was the last missionary fireside with President Maxwell as this would be his last month in the mission.  Finally, I met Elder Concardas (from Philippines) who was now assigned in the city branch.  I told him to meet Jake (of the Australian Ballet) when he would return after his tour. 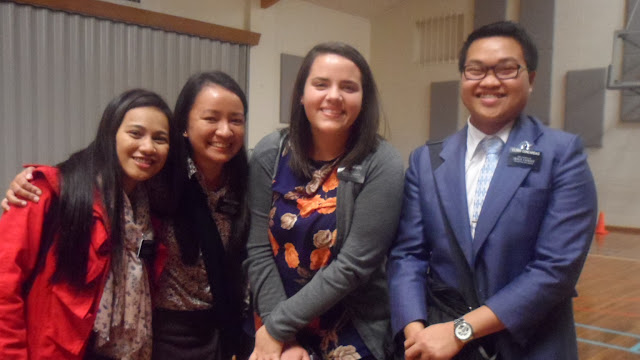