Lots of flying as I was transferred to Tasmania; flew back to Melbourne for training, then returned to Tasmania, viewed General Conference in the chapel, and more...

Oct 3, Monday - We went to Point Cook Park to watch sunrise and hold testimony meeting with the zone. Four of us were leaving the zone: Elder Bennion to Braeside, Elder Lungu going home to Maldova, Elder Liu to Hobart, Tasmania and Me to Launceston, Tasmania.  My comp, Sister Paulo would be with Sister Johnson to train a Golden again.  They both trained Sister Manosig before they were called STL.

We picked up Sister Johnson at the airport, then visited Jenti and the kids. This was the last time I would see them and I didn't give them any clue.

Oct 4, Tues - Transfer day. I gave the car keys to Sister Johnson. I would be Sister Tau'a'alo's companion for the day and we also attended a leadership training. She would be training a new missionary arriving tomorrow. 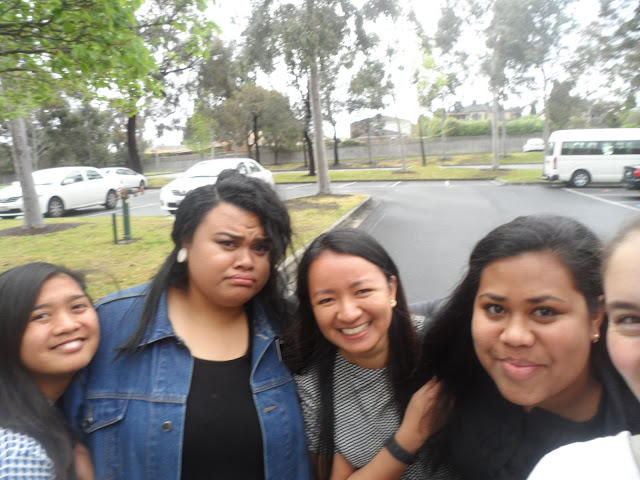 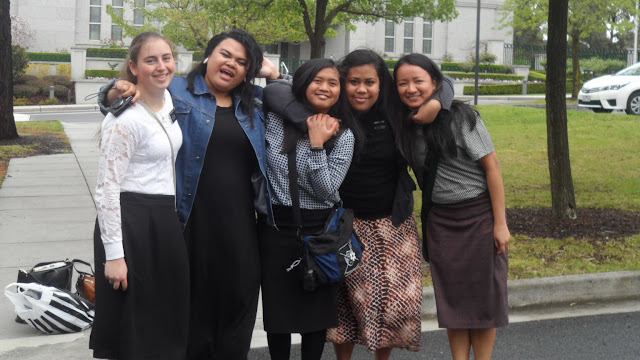 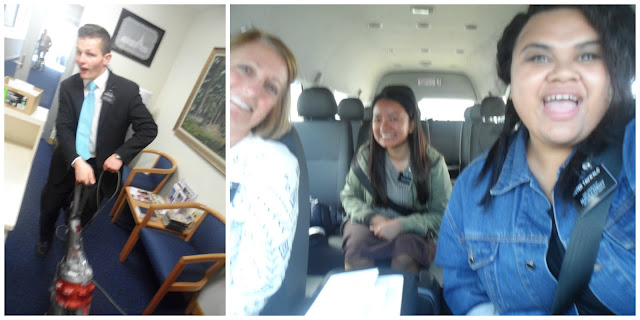 Elder Rolfe was cleaning the office while waiting for exit interview with Pres. Vidmar. He would be going home tomorrow. We went with Sister Vidmar to pick up a rental van for the Goldens tomorrow. They used to rent a bus but the mission could save money if they rent a van (1 van more in addition to the existing 2 vans in the mission). 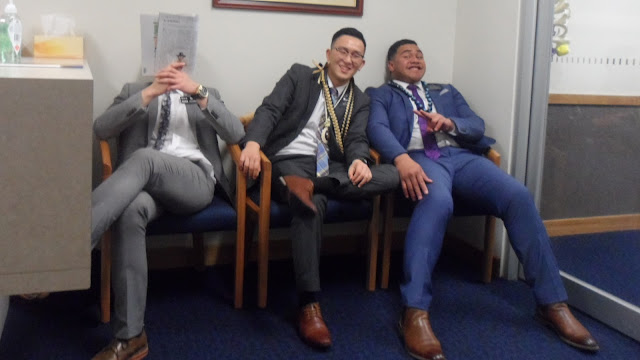 Stayed with the Wantirna Sisters. We visited the Liki Liki family and a recent convert from El Salvador, Ana with her 2 kids, Lucas and Santiago. 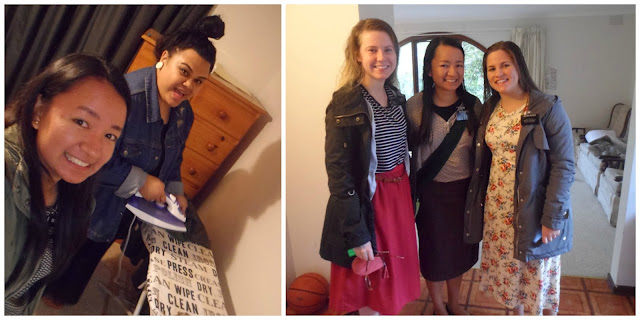 Sister Lambert (going to Wagga wagga to train a new missionary), going to the West side..huhu..I'm not there anymore, but it's okay. Sister Rhodes would be training a new missionary.

Oct 5, Wed - Driving to the airport 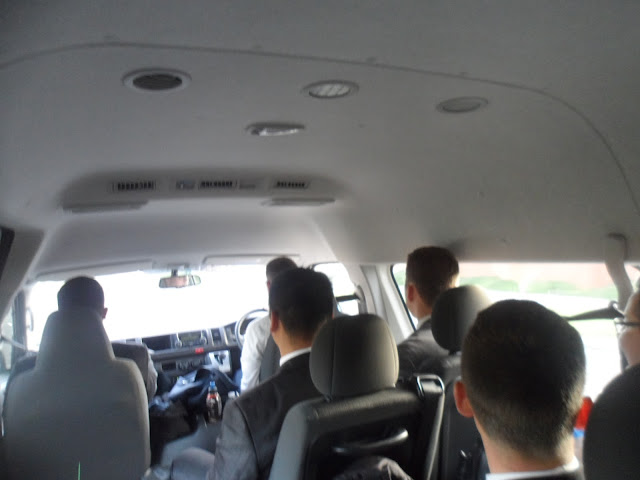 Elder Jensen (from Alberta) would be training 2 Goldens and would be a District leader in Heidelberg Zone. Elder Jeremiah (AP), Elder Howell (new AP) and Elder Morones, new DL in Tasmania. all for Tasmania!  We flew together. 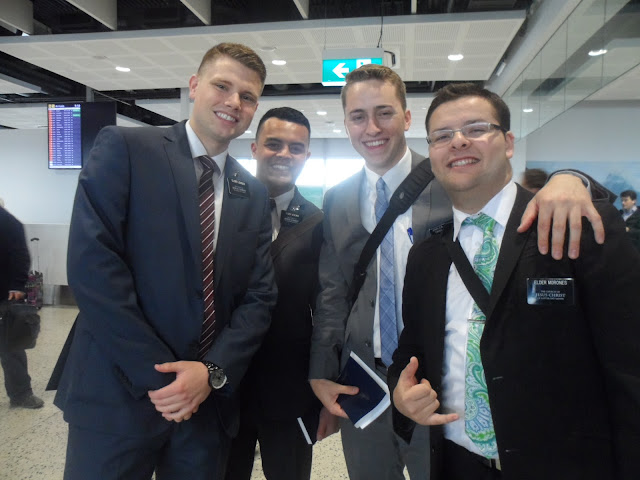 While waiting in the airport, we ate breakfast and had the chance to talk to Dario. He took our photo and couldn't be in the photo with his work uniform. Dario accepted 3 pamphlets to read, was nice to us and interested in what we do as missionaries. He just bought a house which he counted as achievement. I was not able to get his information but he had the mission office number, hopefully, he would have find time to call. 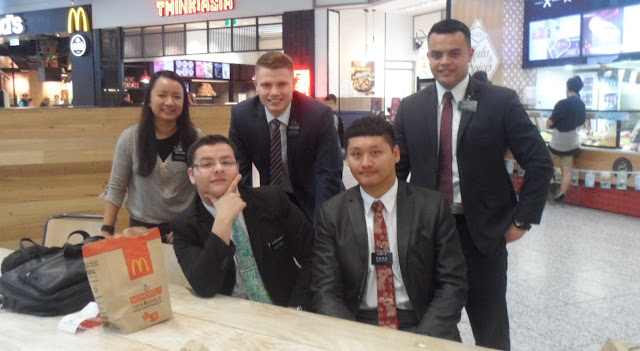 We landed Tasmania around noon and met Sister Tupu who was with Claudia, her companion for the past 2 days. Claudia was a really awesome member-missionary but her parents were not LDS. We visited a few formers, met new contacts and had a lesson with investigator, Paul, a friend of the Kauwhata family. Paul had lots of questions. We watched the Restoration video with them. Tasmania was cool and so much green. 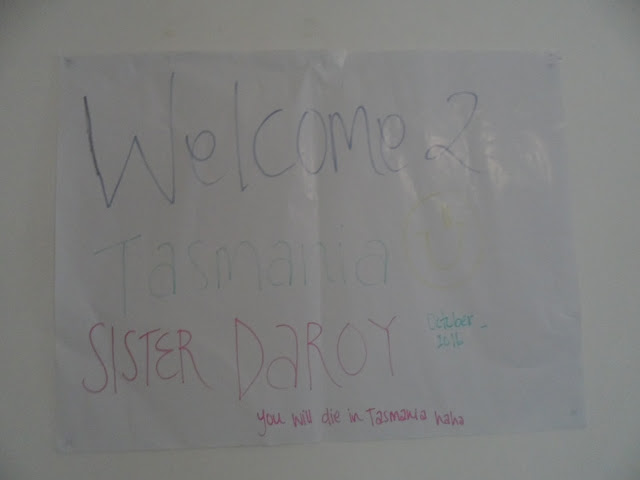 Oct 6, Thurs - Walked into this park during exercise. 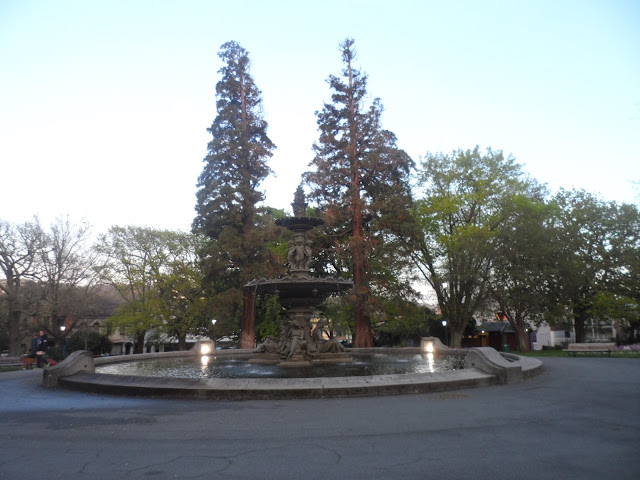 We had DLC this morning,  my first time to have DLC over the phone. We then visited Jackie and her godson Paul and read the teachings of President Hunter with them, after which, Jackie drove us to the airport.

Flying back to Melbourne for MLC.

With Sisters Johnson and Paulo, we had dinner in this Kebab place, Sister Wairepo's favorite kebab place.

We stayed in the mission home, ate bread and choco milk with Pres and Sis. Vidmar; they asked me about my impressions of Tasmania.

Had a little chat with these Sisters before going to sleep; it's good to catch up with them. 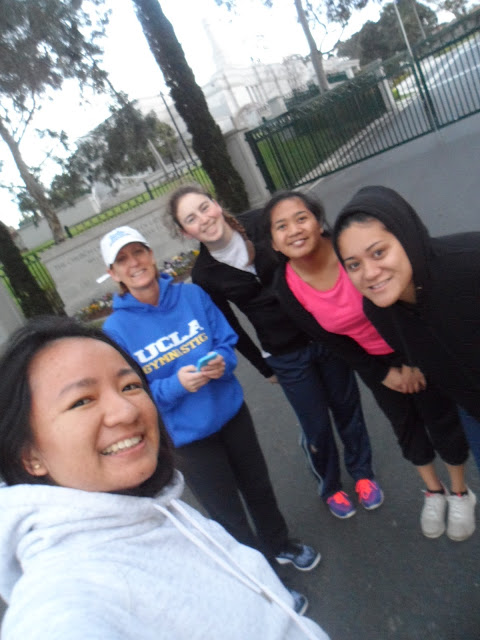 Oct 7 , Fri - Power walking in the morning with Sister Vidmar; she told us to walk faster and that we needed to catch up with her. .hahah.. she's so cool. We walked from the mission home to the Temple and back .. haha.. 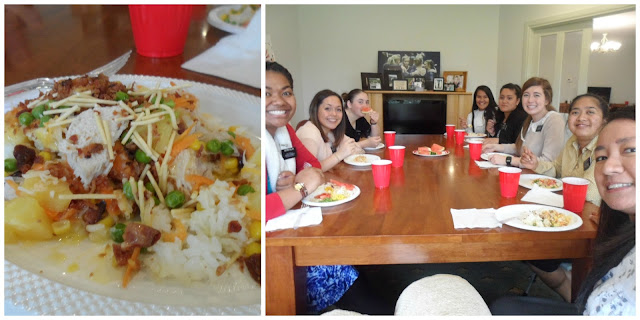 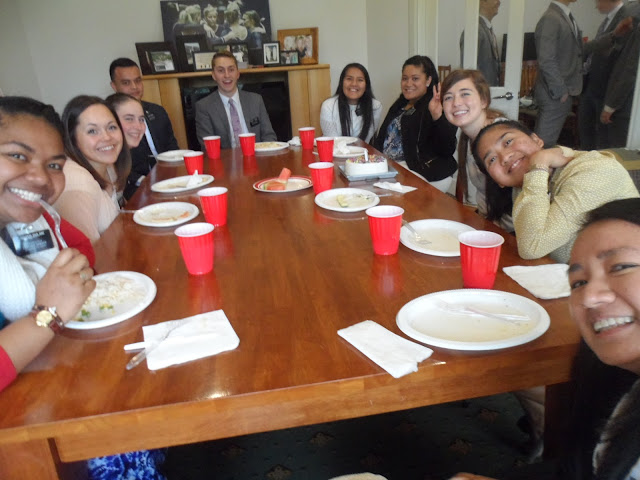 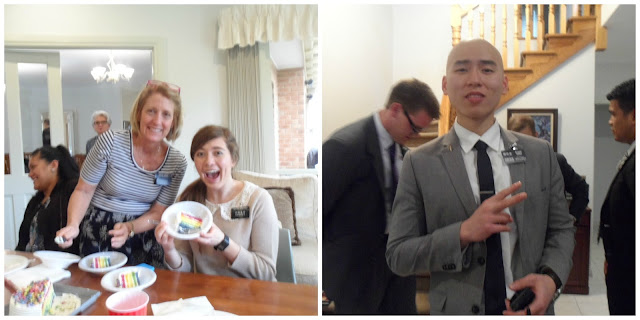 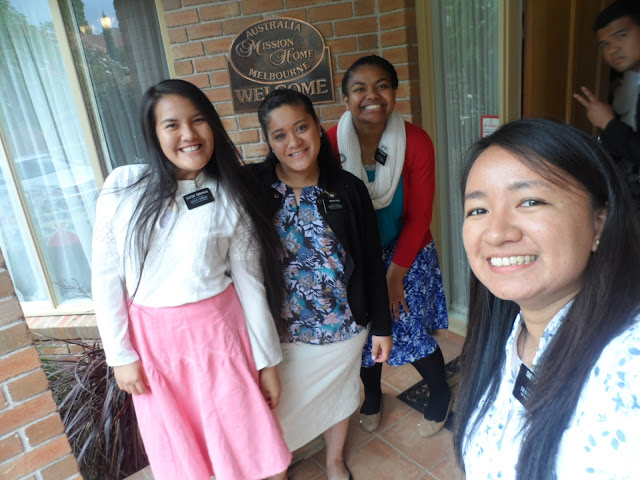 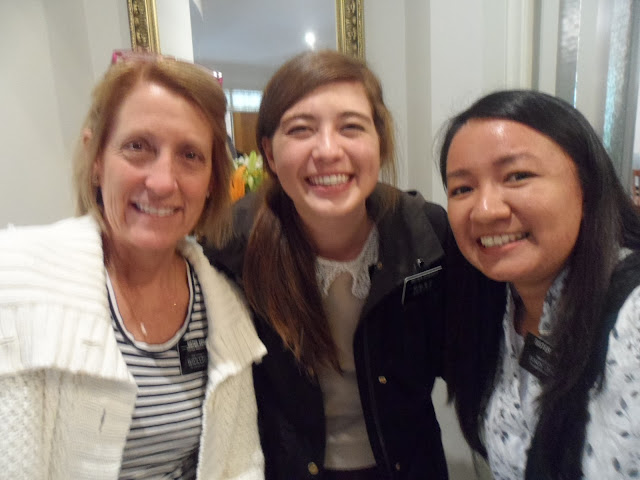 After MLC, we went to pick up Sister Johnson and Paulo's golden, Sister Ihaka (from Fiji but she grew up in Sydney), who stayed with the Sunshine Sisters while we were in MLC.

Going to Tarneit; would stay with them for the night. 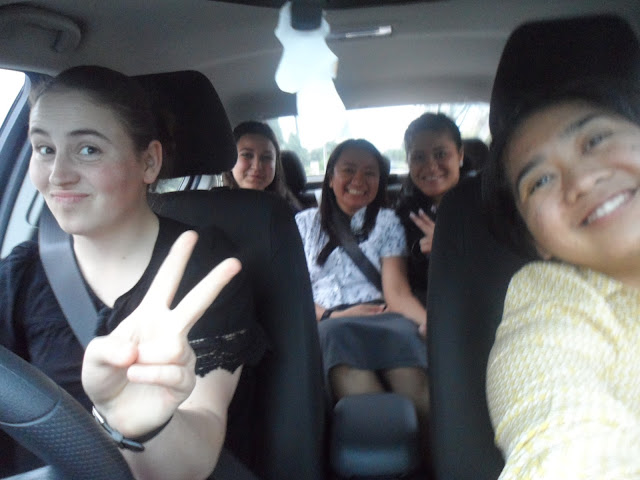 Oct 8 - Sat - They drove us to the airport; ate breakfast; flying back to Tasmania with our zone leaders, Elders Poulson and Albrechtson.

i met the same flight attendant from last Wednesday and she asked us about our badges, a missionary opportunity. RS president Sister Wheeler picked us up from the airport. Photo shows her daughter Eve, soo cute! I met Sister Wheeler last Thursday and shared a message. She also shared to us her story and that she's an 8-generation Tasmanian. Her family was part of the first fleet from England. 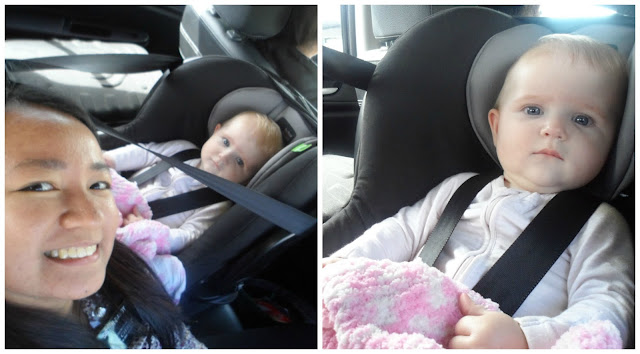 We did bread runs every fortnight. We were given a list of people to drop breads. These bread were not sold after 5 pm, and instead of throwing them out, gave them to us to give out. Today, we had 21 bags to give out... so excited! 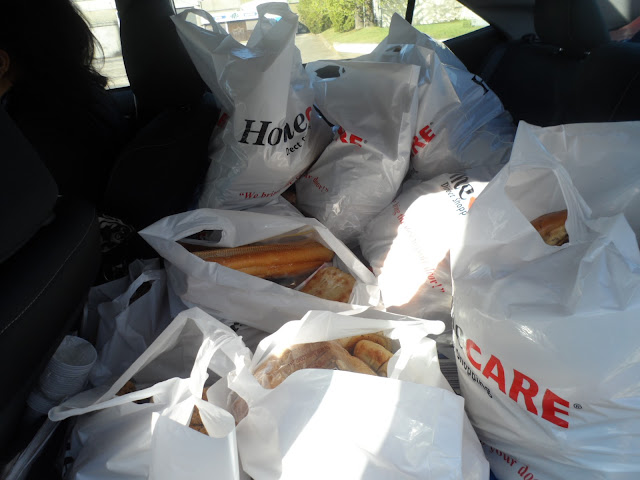 Viewed Saturday Session of the General Conference in the chapel..
Our place 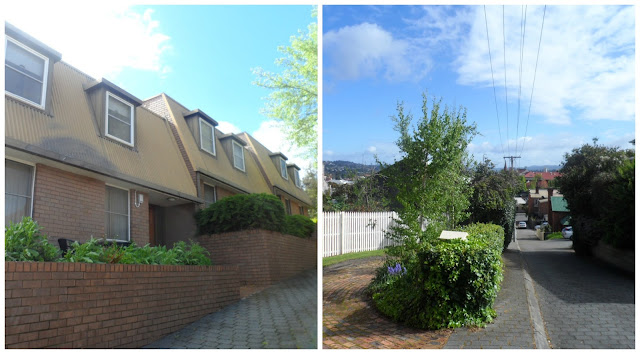 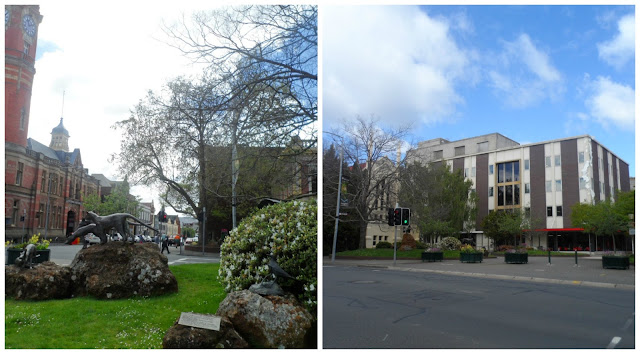