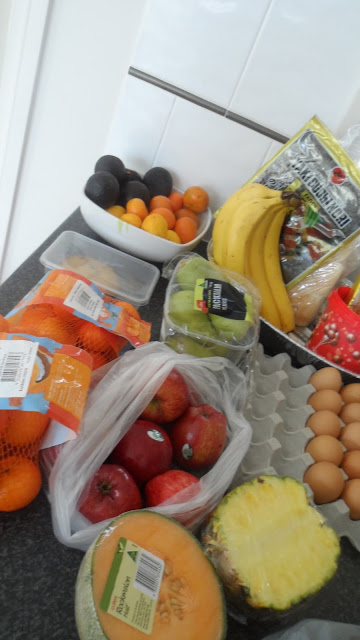 Sept 26, Monday - On this P-day, shopped for fruits for our every morning fruit juice - gotta stay healthy!

Played ping pong  with other missionaries at the stake center, got my chance to play again after some time, while Sister Paulo played volleyball with Aniva and Nikki, 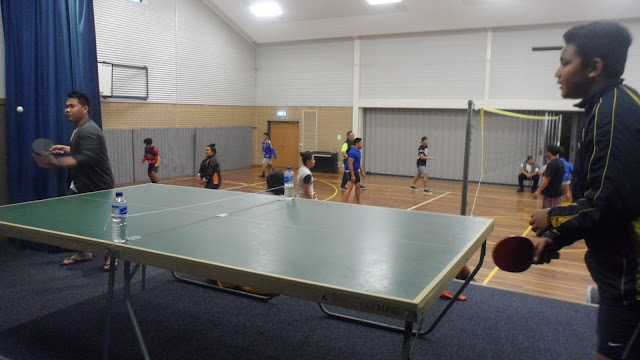 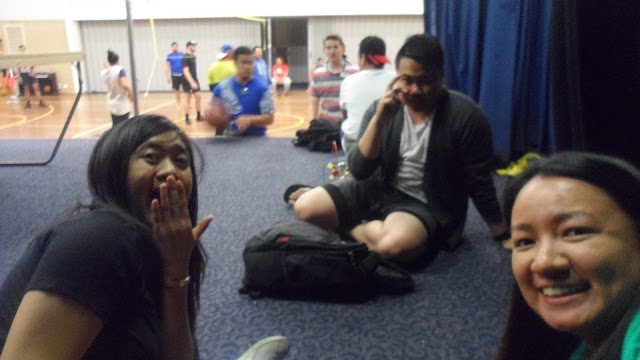 With Elder Casil, Elder Bennion and Elder Togia in the background

Had Family Home Evening (FHE) with Nan,  We cooked bacon and eggs; had toasties..yum! 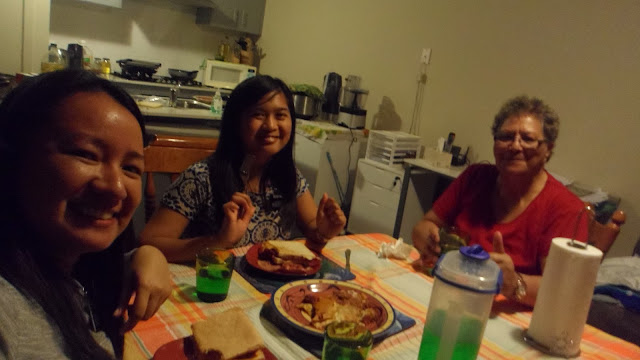 After Nan, we visited Jenti and kids and shared the story of the 2000 Strippling Warriors.  We had them do a role play where they put on an armor of a Roman soldier, likened it to the whole armor of God and they loved it!

Sept 27, Tuesday - I gave training on how we can help investigators recognize answers to their prayers using the experience of Alma in 5:45-47 where he fasted and prayed and was able to know for himself that the gospel was true through the Holy Ghost. We then role-played how to introduce the influence and power of the Holy Ghost using the Restoration pamphlet. It was fun!

Then we picked up Lorraine to help us with a lesson with Judy, hoping that she could help her come to church as well as her siblings.  It turned out that they knew each other back when they used to come to church. 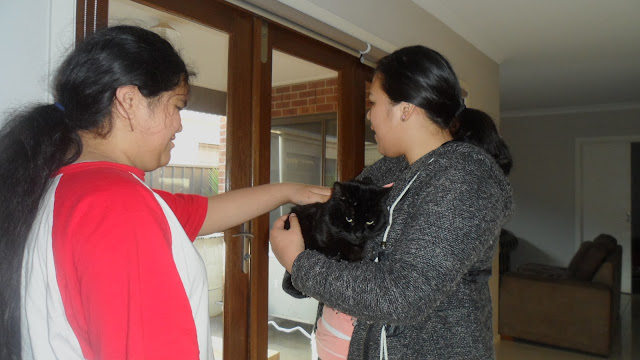 Lorraine and Judy talking about cats; they both liked cats.

We also went to the Vini home to help them weed their garden. After our labors and accomplishment, we put on our shirts, our fave colors. Did we do a good job? see photo... 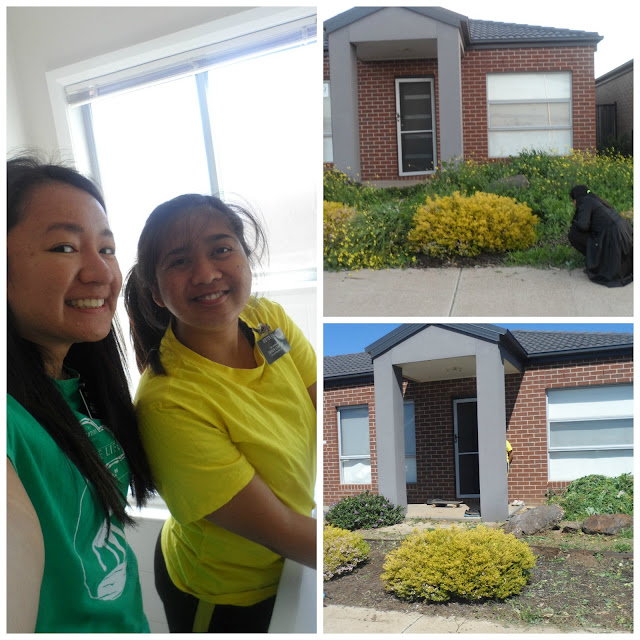 We were about to go home when my companion suggested that we visit one more family from the ward list, the David family. The mom opened the door and told us that they were not ready to come back to church. We talked for a bit, then the mom asked us if we had eaten. We said hesitantly, 'not yet but don't worry.'  Instead, she invited us in and offered dinner, beef stroganoff, it was yum. We were able to meet her kids, 6 of them, all less active. They had very active families in the east side, with callings and some, temple workers. They told us that Bro. Court always visits them. We asked the kids why they were not going to church and they said that they did not have friends. The family said that we could come anytime and we're always  welcome; they had not seen Sisters in ages. 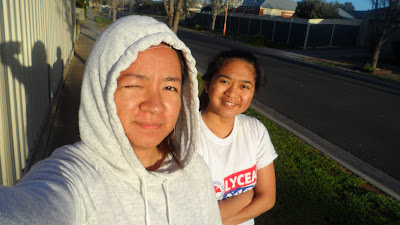 Today, we met with Val, a Filipino we met last week. He had a lot of questions about Restoration and Plan of Salvation. He wanted to learn more about our beliefs but was not committed yet. He was nice and told us that he would cook Filipino food when we come back. He had a picture wall where he had family photos taken every two years. 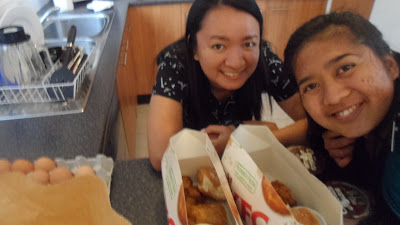 Sep 29, Thurs - Attended DLC of Deer Park, discussed more about how we could help the Sisters in their zone and how to help the investigators they were working with. 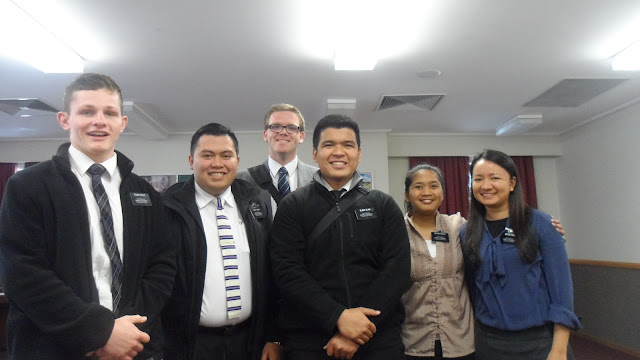 Sep 30, Fri - We had dinner with the Tuitupou family. Amelia's friend would sleepover to her house, Brylie. Sister Akesa invited Brylie to join in the lesson and she did. We introduced her to the BOM, asked her if she ever wondered where we came from, why we are here, and where we are going. She said that if she would, her head would explode. She had no religious background and we were so excited to meet her again if she wanted to. After dinner and sharing, we proceeded to the Molesi family, had a really great lesson with them about the Restoration. 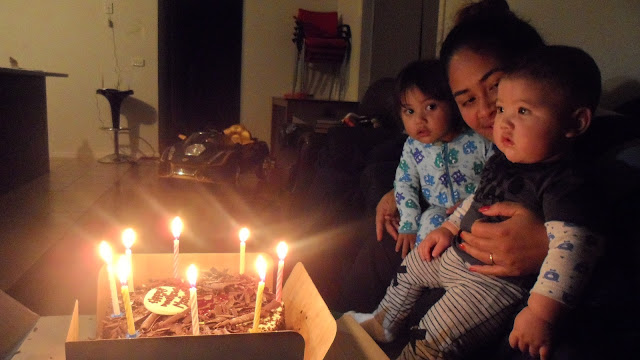 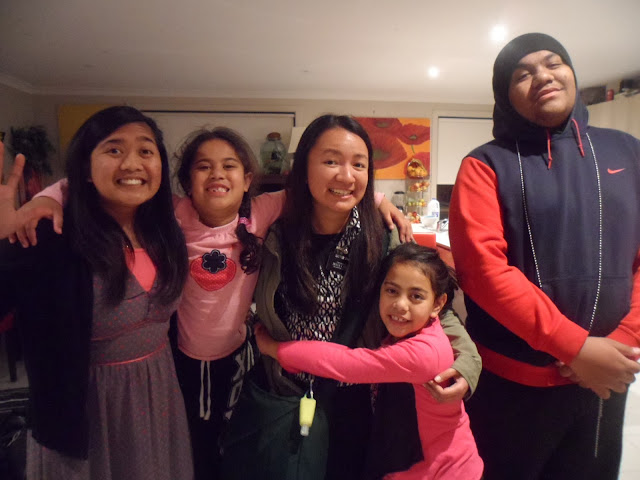 L-R: Sister Paulo, Nicole, Me, the huggy girl, Tyrone. they were soo cute and huggy and would not let us go. When we sat down, they had their BOM in their hands and opened to the chapter which we invited them to read..soo cute. Even at the door, they still hugged like Koalas. 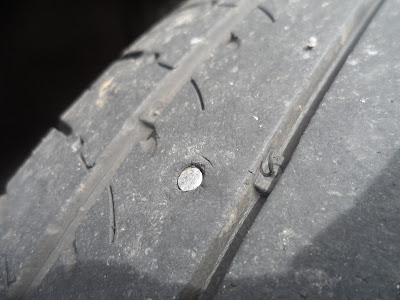 Oct 1, Sat - While backing the car, Sister Paulo noticed that our tires were 'flat'. We went to put air but saw this nail, so we drove to service repair and would not get the car back till 4 pm.

We called Sister Samaseia and she was happy to help us out with rides and lesson with Arwin. We shared with her about Tithing and Fast offerings; Arwin told us that she was gonna ask us about that. Sister Samaseia testified and shared her experiences with paying tithing as well. (Later on, Sister Samaseia shared during Fast and Testimony Sunday about that experience. She was really happy. She said that she wanted to serve a mission but did not get the opportunity. She invited the members to work with missionaries more. Yes, members were willing to help,; they just needed to be invited.)

This had been an awesome week. Lots of miracles. One of our investigators, Arwin, shared how she used to be a Queen back in her country, As a Queen, she always stayed indoors and if someone wanted to see her, the visitors needed to make an appointment. She could not freely use a phone and everywhere she went, she had bodyguards. She didn't like it When she met her husband, she stepped down from the throne because he was a simple man; then, they moved to Australia. Though she had everything before, she was not happy and she was looking for something more. In Australia, she did service like cooking food and serving in the community until she became a community leader. She was very busy with lots of different activities. She was taught by missionaries a year before but her progress was put on hold because she was busy. When we visited her, she already wanted to learn more. She went to church and felt the Spirit and told us that this is the church where she would go with her kids, that she would fast and pray for their baptism this month. They're progressing as a family, coming to church always and willing to give up her other activities to focus on family and learn about church. She was awesome and willing to give up everything to know more, just like the story of King Lamoni's father.

Her story reminded me of how Heavenly Father really loves us. We are of Royal descent as well, however, He is not forcing us to that role, unlike what Lucifer proposed. He has given us our agency to choose for ourselves. He has given us this life to prove ourselves if we are worthy of the blessings He as in store for us and the mansion He has prepared for us. Are we willing to give anything for that? There are a lot of people searching for happiness and peace and they don't know where to find it. I am so grateful to meet Arwin's family and the people in our area. I know her family will eventually be sealed in the temple.

We went to visit Jet and his family but he left this note. It's good that he left a note so that we know that he remembered our appointment.

Later today, we visited the Sunshine Sisters for flat inspection. They were awesome for maintaining a clean flat..the Spirit dwelt. 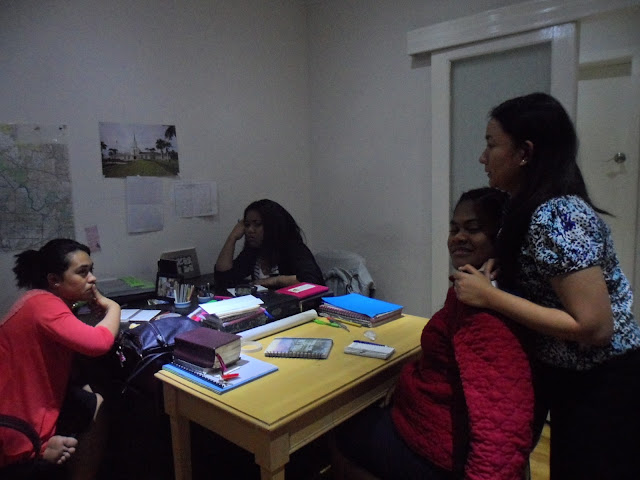 Sep 30, Fri- We had interviews with President Vidmar. Pres. and Sis. Vidmar were on a ping pong match, Pres won..hehe..Later on, I played doubles with Sister Vidmar against the Assistants, Elders Jensen and Jeremia. Who do you think won? 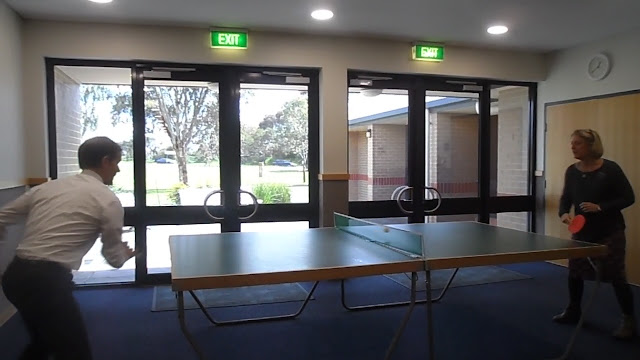 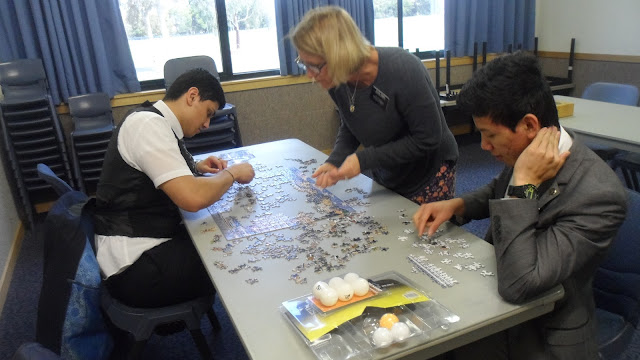 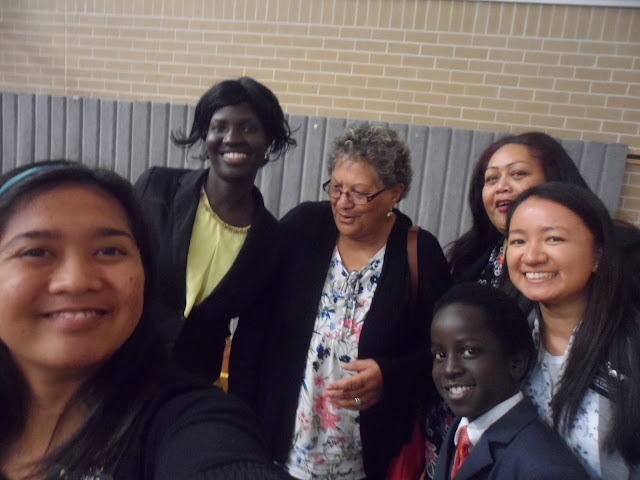 Daniel was jumping around 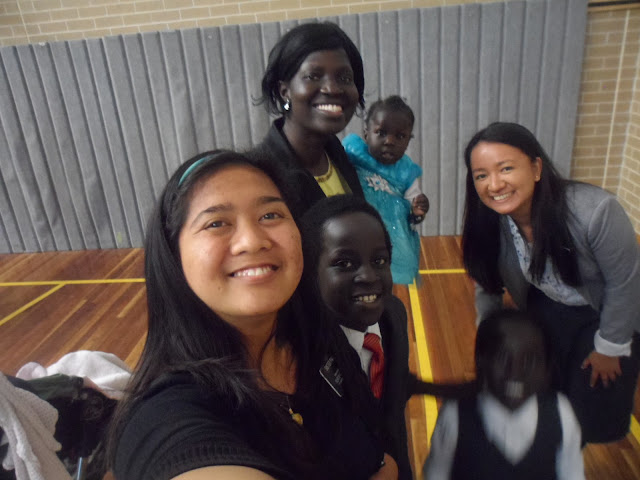 Met Sister Kim from Footscray. She was so happy to see me again. She helped us with our lessons with Junseop. 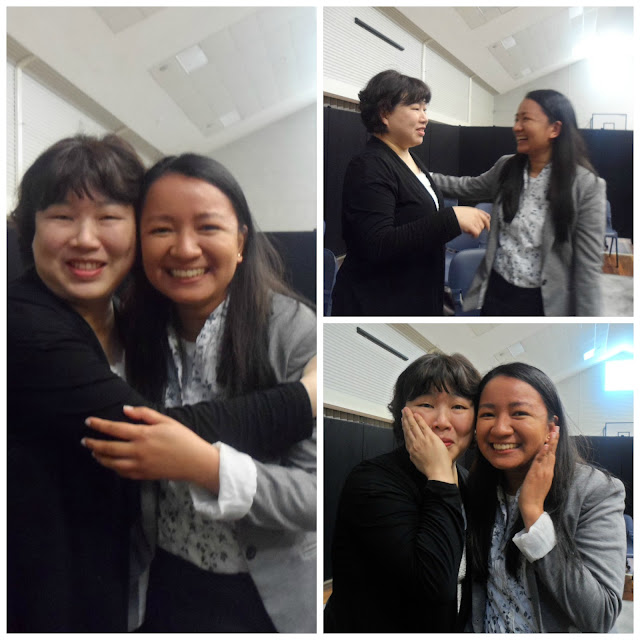 Later that day, while on our way to visit the Kuri family, we met Karen walking her dog poppy. 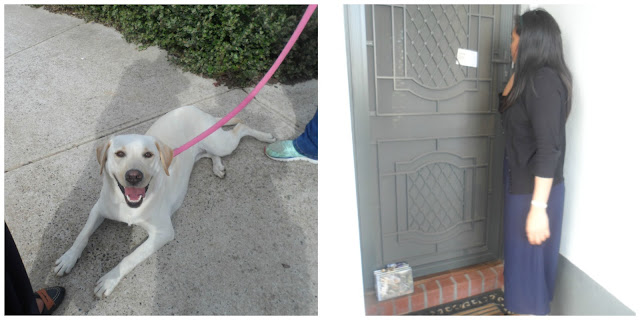 We then drop a letter and some church Dvds she could watch. We left it when she was walking the dog.

Sister Tupuo invited us for dinner tonight together with Nan and the Taula Sisters. 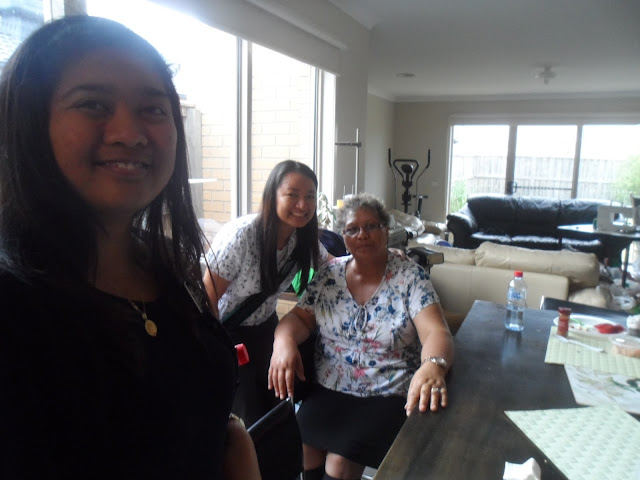 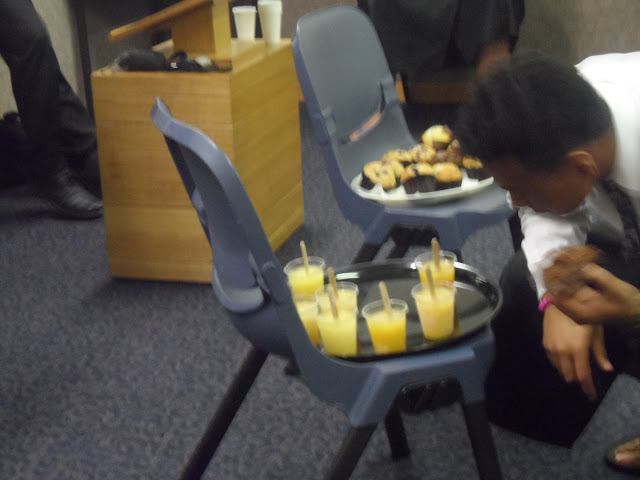 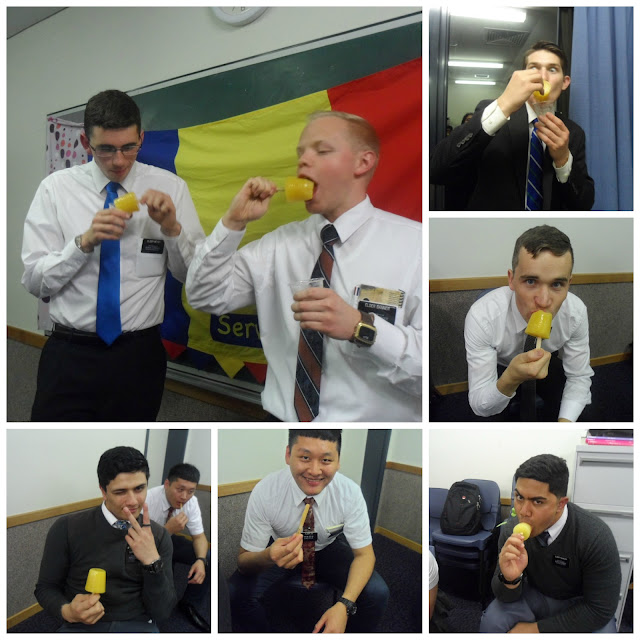