I left MTC-Provo on Monday, Jan 11 and arrived in Melbourne on Wednesday, Jan 13; had a 13-hr flight that was painfully long (only because I can't watch the videos) - from Salt Lake City to San Francisco to Auckland, New Zealand (13 hrs) and Auckland to Melbourne (2 hrs). I slept as long as I could. The food was good, really good so I ate it all, even ordered as much complimentary drinks as possible. When I got off the plane, holy hotness, it was so hot, 44 oC.  I got past security quickly, no questions asked, guess it’s my charms. While we were waiting for other missionaries to arrive at the airport, we contacted people, that was interesting. Then we got on a bus to the Mission Office, which is literally across the Melbourne Temple! how cool is that??! 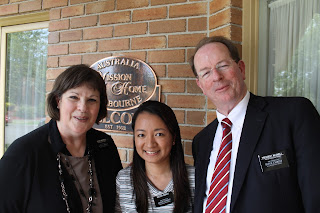 My mission parents are President Maxwell (his dad is/was Neal A Maxwell!!) and Sister Karen Bradshaw Maxwell, formerly of the Mormon Tabernacle Choir. We had dinner at the mission home, some were too tired to eat but me, I ate all the food served and even got ice cream ..hahha..

Then I got my companion, Sister Albania (who has been out for 13 months), got to the flat, planned, went to bed and fell asleep right away. I slept really good, woke up on time and no jet lag at all, that was cool. 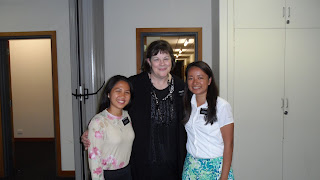 My first day, Thursday, we GQed (street contacting) and since we didn’t have a car, we rode the bus, train, and tram everywhere, it’s actually cool!

Our area is Footscray; this place is hot, big and full of people from all over the world! It is like a treasure hunt to find people who are ready, but that's what makes it fun! Also, on Thursday we went to the city for district meeting.

We did finding for 2-3 hours daily; we knocked on doors and shared the gospel. Most of the people were not interested but we had 2 new contacts last week. We met Janna and Wilma's family.  After church, we got to  share a lesson with Wilma's family; she's from Sudan, lived here in Australia for almost 8 years, has 4 kids, committed to attend church next Sunday and also to read the Book of Mormon.  We will be teaching her again on Thursday. I also found some calamansi trees, haha knocked on someone’s door and asked for calamansi- she said 'no' to our message but said 'yes' to the calamansi, so I picked 5 calamansi (next time I’ll bring a big bag). 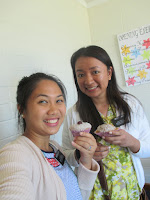 But yeah, that was my week in a nutshell! Church is great, the members are nice.  Of course, I got asked to bear my testimony, then there were cupcakes after the Relief Society meeting. I look Vietnamese, they say, can't escape it.. haha, anyways, I love the gospel, the church is true and I love talking to people (getting there) and sharing my testimony!! I love becoming better everyday!