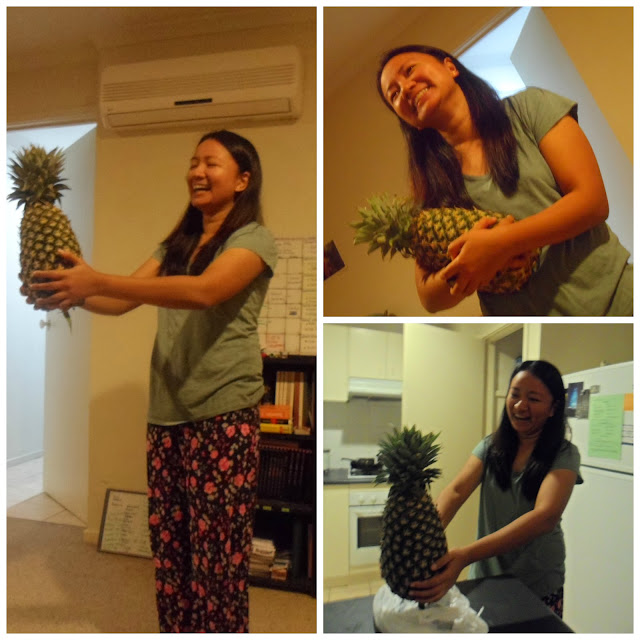 After our emails today, we received call from Bishop about a referral, Antonin, so we went to his place, but it was going dark, there was a gate but no doorbell so we decided to try him another time. When we called him on the phone and introduced ourselves, he told us that he had no time for missionaries and hang up.

Apr 25, Tues - Today we invited Sis Lani and Tami to go on splits with us to visit the new contact Jaynelle and to continue working in Noble Park. Because of time, all of us went to teach Jaynelle and didn't end up doing splits. Jaynelle was SDA (Seventh-day Adventist) but she really enjoyed meeting us and had a great discussion about the Plan of Salvation. Sis Lani and Tami were awesome fellowshippers.

The Wantirna Sisters came that night for exchanges tomorrow.

Apr 26, Wed - I went with Sister Cehajic and we visited Sister Latreille and followed up on her goals. 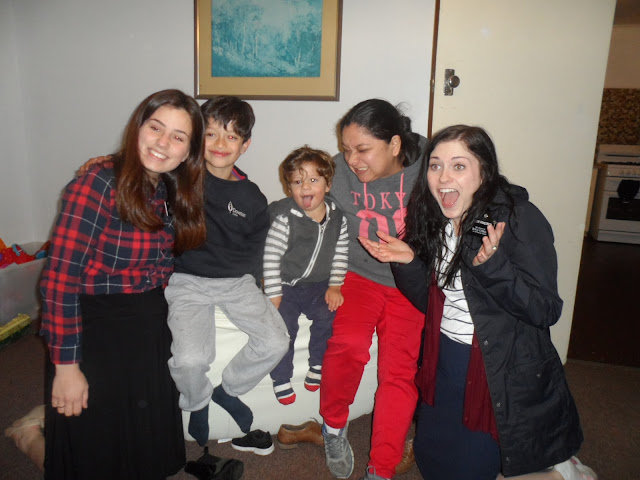 Later that night, we visited Ana, Santi and Lucas from Wantirna who recently moved to Dandenong Ward. The Sisters missed them so we stopped by and taught Santi about the Gospel of Jesus Christ. 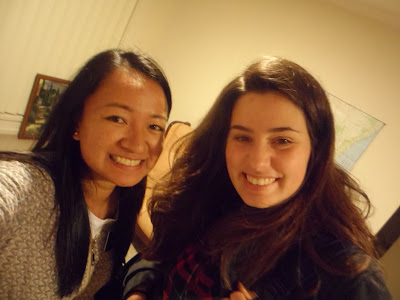 We tracted today and met a few people from Sierra Leone and the Middle East. We got a new contact, Ezat, from Afghanistan who was interested to learn. We also met a few former investigators and set a return appointment. 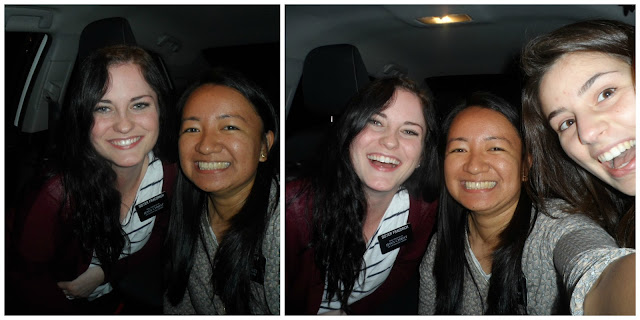 When the Wantirna Sisters left, we were about to pick up the Hampton Park Sisters for another exchange when we met the Churchill Park Elders bringing the overdue ice cream they promised to give us. 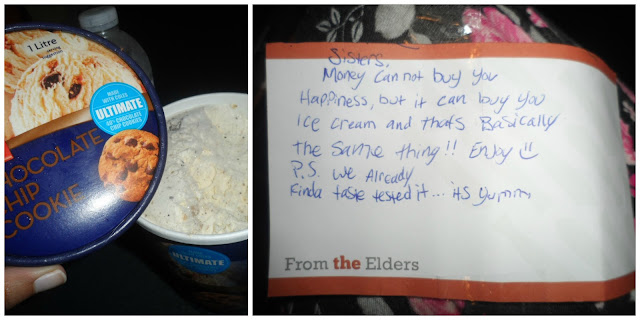 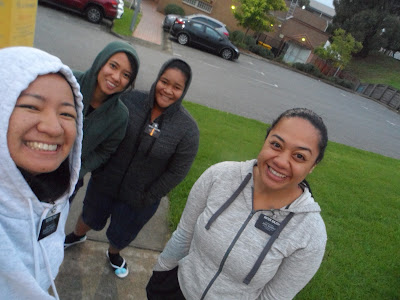 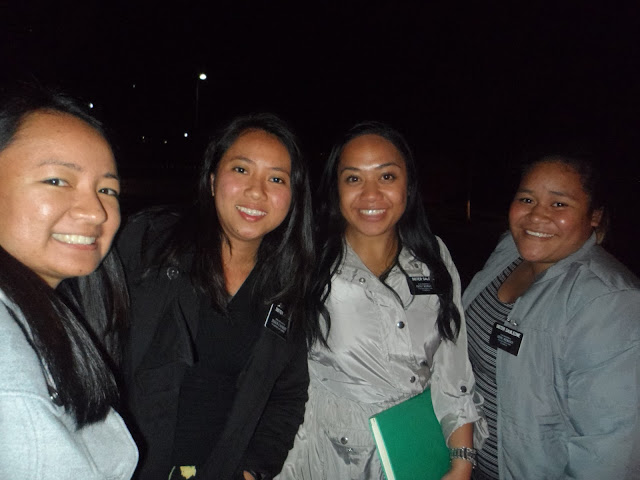 I went with Sister Salesa today and we visited O'Callaghan. We talked to her by the door and we had a nice conversation. She wanted to go to church but very busy at work. Recently she had an experience where her car stopped running in the 'stop light' so she prayed that it would roll to the side safely. Her prayers were answered on time and she was grateful, took it as a reminder that God wants to hear from her through prayer. She said that she wanted to come back to church and so we were excited to help her.

Remember Antonin? We called him again last night and told us the same thing. Today we went to his house and knocked at the window (first time I did that) and he came out. He was actually pretty nice and we talked to him more. He was from Czech, had Parkinsons, excited to read the POS pamphlet, and we set return appointment. Miracle, after two times of rejecting us, only a personal visit was needed to get an appointment.

We also visited Satyea, very young but had cancer and a one-year old son. She's coming back to church on her dad's encouragement. She went to LDS in the afternoon and catholic mass at 6pm, but her husband, not an anti and not a believer, told her to focus on one so that their son would not be confused. She knew a lot about BOM stories and we just started to teach her more. Her dad was converted in Saudi Arabia, awesome story. Her dad worked in the Library when he noticed an American family and kids behaving very well. He was curious and asked them, they said they were LDS and introduced him to the church. Her dad is strong in the church because of the example of one family in a non-Christian country.

We also went to visit Amber again, though she was going for training, invited us in and we shared a 10-minute lesson about faith. Cortez, the son, when we came, took the BOM and pamphlets from the drawer and gave it to his mom. Amber was really keen to learn and just amazing - other people would say 'I'm going for training' but would not invite us in for a few minutes. We set return appointment with her.

Alex, the one whom we found painting his fence, we got to meet him again, still talkative and told us that no one knows about God's plan for us, even after sharing the Plan of Salvation, to which he said were only theories and no one knew. He was not willing to learn and pretty set in his beliefs; though there were times that he agreed, but when he noticed himself agreeing to us, he would argue again so we just left it at that. He accepted to read the POS pamphlet..maybe he would be ready some other time.

We had a correlation meeting with Bro. Tukukino with Jet. The Elders did not make it tonight. We also had a new assistant ward mission leader, Bro. Muse, who just moved in from USA to work. 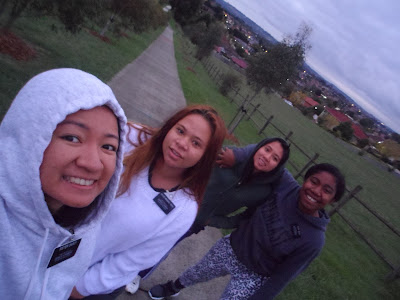 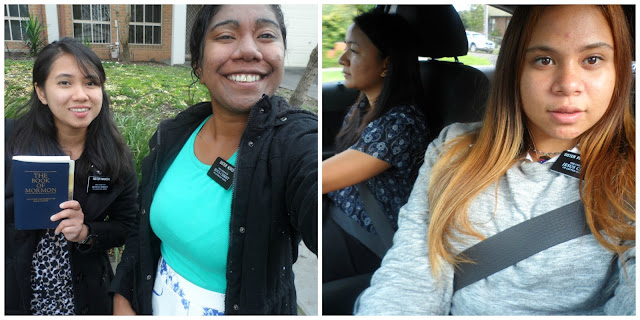 Sister Huang called us yesterday that she would like to meet us. We had been trying to catch up with this family but no one was home and out of nowhere called us. We got there 10 minutes late and no one was home. We called and they said that they left something for us in the mailbox. It was food, yeay, we had lunch!

In the former records, there was one Samantha, with a street name but no number. We tracted that street, asking if they know Samantha, it was fun. We tracted into a member's house from Samoan ward, we woke her up..hehe..She referred her neighbor to us and gave us some details. Yeay, referral. 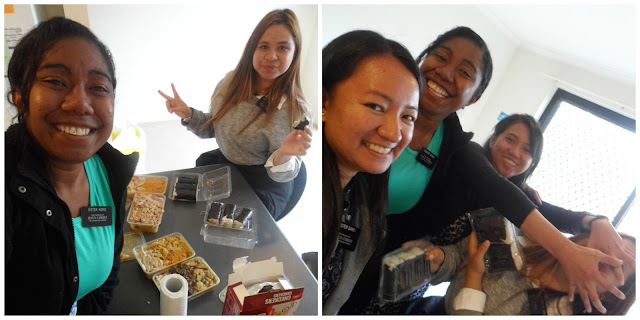 Sushi and Chinese food. After lunch, we visited a member in Narre Warren ward, in Dandenong hospital, because she broke her leg from falling as she was trying to reach her cupboard. We shared a message about hope and faith. Her family had stake callings once but no longer active in church now, sad, though she's still strong in her faith and had patience. We didn't have enough time to visit more people as planned because we needed to pick up some Sisters and go to Braeside Stake Center for the mini mission weekend. 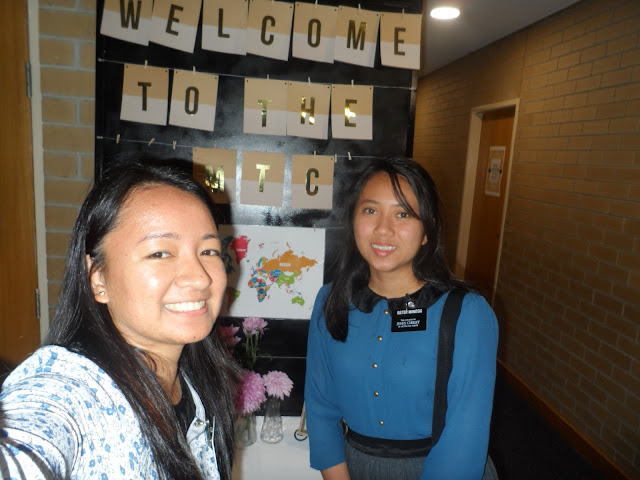 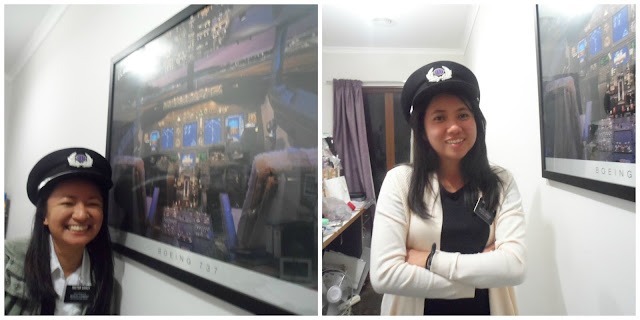 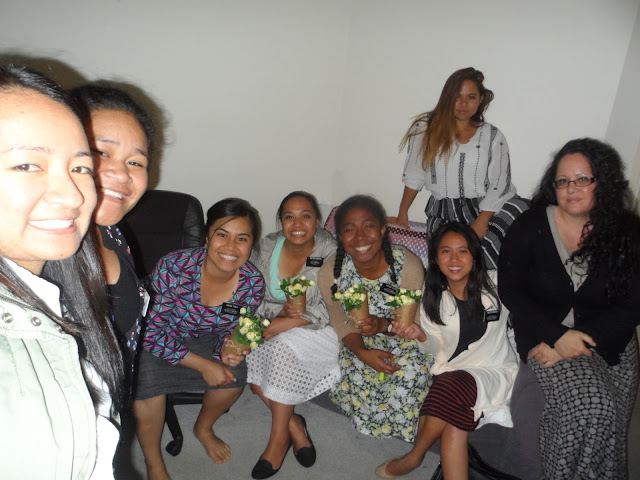 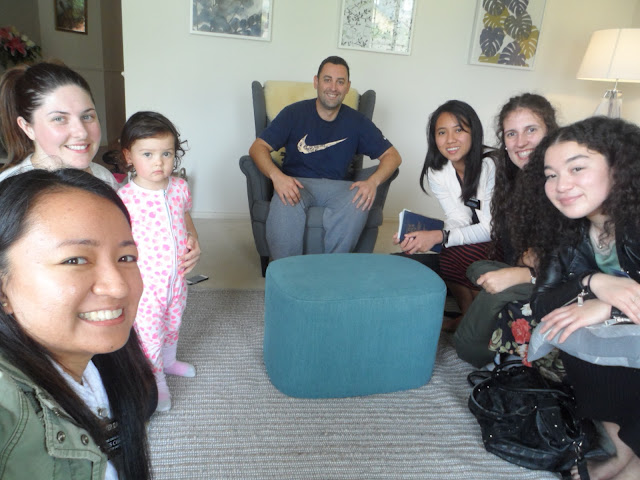 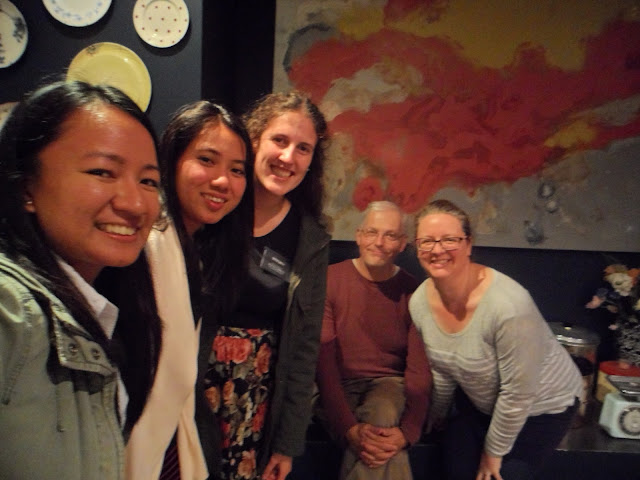 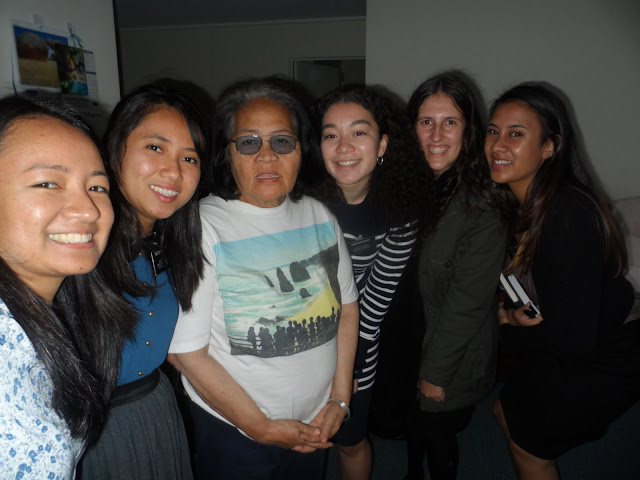 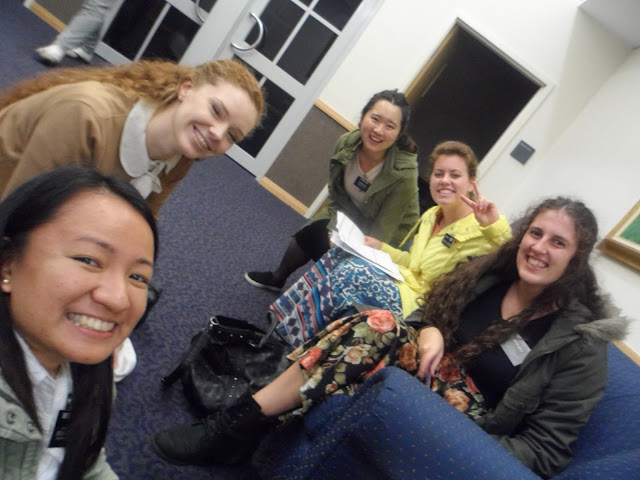 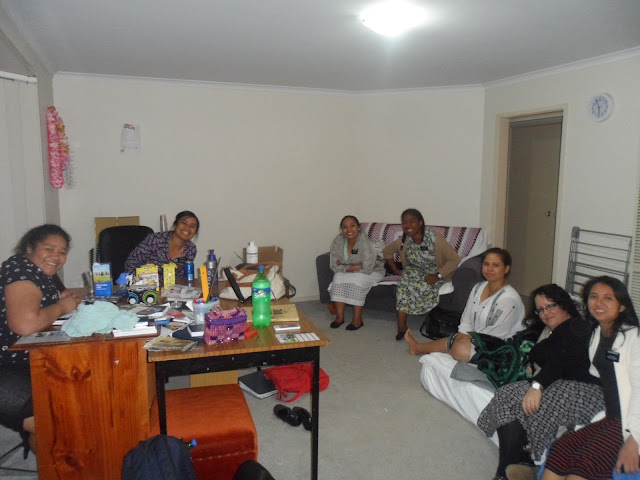 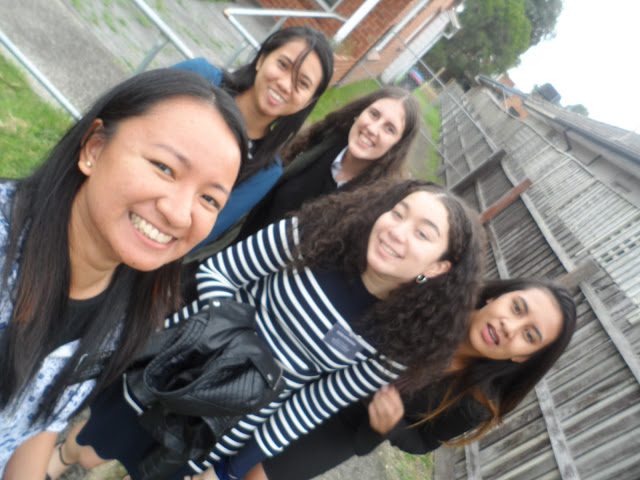