There is no stopping in missionary work even if responses do not seem positive or favorable. Just believe, no missionary effort is wasted.


Monday, Feb 22:  Monday is preparation day (P-day).  We do our thing such as one-hour emails to family and friends at Footscray Library, laundry, and grocery for part of the day.

We went to the shopping center at Highpoint which looks like Eaton Shopping Center back home.  While waiting on my companion in the fitting room, I took the opportunity to speak to the saleslady who was waiting on her, what Big W means (name of store).  I thought it was short for Walmart (knowing Aussies like to shorten words) but not Walmart. Anyways, I learned a few things about the saleslady so I also introduced myself as missionary.  She was very nice but refused to accept pamphlet or card. Not the right time. Hoping to meet her again when she's not working.  Later today, we visited the Dutt family from Sudan.  Their 3 boys were very active in the lessons and had fun doing the activity "Tying Knot" analogy for prayer. 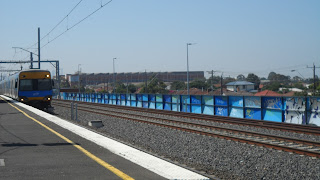 Tuesday, Feb. 23: Went to Altona Meadows, very hot 40 oC and stopped by the home of the Doust Family. They were very nice and offered us a glass of water which I consumed in a second.  Then we moved on and looked for Jim, a retired teacher, whom I found with Sister Chen 2 weeks ago. We talked to him by the door and he shared a lot of his experiences teaching grade school. He was very nice but we had to end the lesson because he was perspiring a lot because of the heat.  Next time, we will invite the Doust family to help us with a lesson with Jim so we can get inside his home.Then we continued to visit some LDS in the area but we had to go home early because of the storm forecast.  There were train delays, the winds were strong but didn't really rain that hard.

Wednesday, Feb 24: We went to the house of a referral from the office who requested a free bible. When we got there, the wife said that they only accept Orthodox books. That was strange to me. Then we visited Reina. She had been through a lot and we comforted and taught her. We will meet her again next week. As we hurriedly made our way to Footscray Library to meet Adam (a referral from the Elders), we were stopped by a man named Tarun who said that we should teach 'humanity' first so that people will become receptive to our message. We told him that we teach of Christ because it helps people to do good (2 Nephi 33:10). We also taught him the plan of salvation; he accepted a copy of the Book of Mormon and pamphlet but firmly expressed that only God knows what will happen to us after we die and its none of our business to know about it. We then met with Adam at the library.  After getting to know him more and vice versa, we shared to him the Restoration and the Book of Mormon. He agreed to read the Book of Mormon and meet us again on Friday. 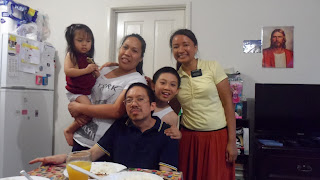 Then we joined the De los Santos family for dinner - Sister Nessa's birthday! 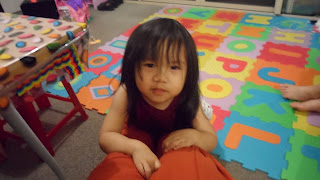 This is Ayeesha; she loves to play.

Thursday, Feb 25: Had our district meeting with new faces in the district and zone.  I was excited to meet the new Goldens but the Trainers said that they were still flying somewhere in the Pacific Ocean. We were invited to fast and pray on Friday to achieve the mission's baptism goal for February.

Friday, Feb 26:  Our second visit to a part member family, Batshon, but we were told to come back again...again..and we will.  We also met Adam today and he was curious how to have a personal relationship with God.  He had a lot of questions and we invited him to read, ponder and pray about the Book of Mormon to find the answers.  Then we went to Seddon but seemed like the Makaea and others were not home. We spotted a calamansi tree and asked for some.  Then we saw Rose painting a table and learned that her partner is LDS. They moved from New Zealand a year ago. Rose wanted to know more about the church! 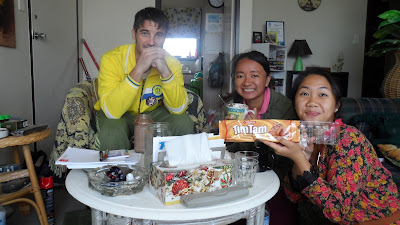 Saturday, Feb 27: Visited a recent convert, Mario, who enjoys biking and scuba diving. He went scuba diving at the Great Barrier Reef a few months ago. I was jealous..haha..then I repented; I will scuba dive after mission. Then we challenged him to a tim tam slam, his first actually.

Mario had a lot of faith and was preparing to receive his patriarchal blessing and go to the temple.

His mom was not LDS but was very kind to offer us fried rice for lunch, which was delicious! We each had a big bowl of rice. 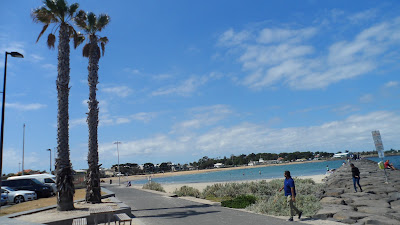 Then we went to the ward BBQ activity at Williamstown Beach.

Adam came and enjoyed the activity. 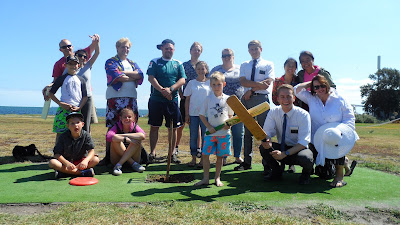 A few of the members who came: some were at the sand but since missionaries were not allowed to go there, some members stayed with us and played cricket.

The way to Church is a bit tricky. Be careful or you'll end up someplace else. 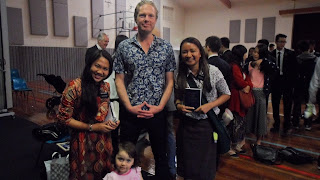 Sunday Feb 28: We had a stake broadcast and Adam came to church.

In the photo with us is Adam and a little kid with pretty blue eyes, although we didn't know her, she wanted to join us. 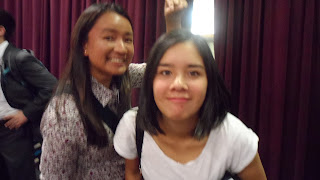 This is Holly.  She wants to serve a mission as well.  Her conversion story is amazing. She told the Elders that they were devil worshipers but they never gave up on her, until she felt the Spirit, got the answer to her prayers and decided to be baptized.

This week I challenged myself.  I called it  "Confidence Builder"  which is to talk to as many people in the bus or train.  It seemed awkward at first but it got easier. I learned that confidence in sharing the gospel should be founded in the Savior, relying not in myself but in the Spirit.


From a generous neighbor: